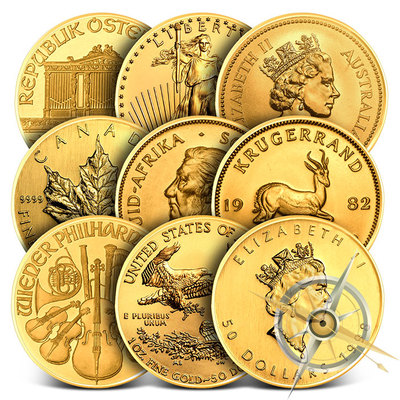 Gold sovereign coins are among the most popular bullion coins bought and sold in today’s market.

Whether you are a collector or an investor, or both, sovereign gold coins are an excellent addition to your collection and can provide stable returns to your investment portfolio. When it comes to investment, many investors are particularly interested in coins with extraordinary designs and higher purity levels to give them greater value.

Widely accepted as a secure form of gold investment around the world, here are the top 7 sovereign coins you can get on the market:

American Gold Eagle bullion coins were authorized for creation by the United States Congress in 1985 as an easy way for investors to obtain small stakes of gold. The obverse features Lady Liberty with long flowing hair that blows in the breeze while holding a torch up to the sky with her right hand and grasping an olive branch in her left.

These coins are the purest (.9999 fine, 24-karat) gold coins made by the U.S. Mint, carrying a $50 legal tender value. Each coin contains exactly 1 ounce of gold.

Many people have a fond regard for the American Gold Buffalo coin because of James Earle Fraser’s vivid and detailed depictions of a standing bison and a stoic Native American portrait.

The Canadian Gold Maple gold bullion coin is issued annually by the Canadian government and comes directly from the Royal Canadian Mint. With a face value of $50, this coin is legal tender and has a .9999 millesimal fineness (24 karats), making it one of the purest sovereign gold bullion coins in the world.

The standard weight for this coin is 1 troy ounce. It comes in other sizes and denominations including:

The Chinese Gold Panda comes in the following weights and denominations:

With a different design each year, these coins do not include mintmarks to distinguish their origin which is a different standard from American coins.

Produced by the Austrian Mint, this sovereign gold coin takes its name after the Vienna Philharmonic Orchestra which serves as an inspiration for the designs that are on both sides of the coin. First introduced in 1989 with a 2,000 Austrian schillings face value, the Austrian Gold Philharmonic coin is considered to be one of the best-selling bullion coins in the world.

Sales for this coin have been quite popular in North America and Japan since it was first introduced, and it is the only European bullion coin with a face value of euros. However, it is only legal tender in Austria.

The Gold Philharmonic is issued in the following sizes and face values:

Since 1987, these sovereign coins have been issued by the British Royal Mint. With a value of 2 pounds sterling, they also go by the name “Gold Britannias.” Each coin contains one troy ounce of gold and comes with a face value of 100 British Pounds. Since 2013, all coins have a .9999 millesimal fineness (24 karat gold).

Gold Britannia coins have begun to play a major role in the coin market, and they are issued in the following sizes and face values:

The Gold Krugerrand comes in the following denominations:

The sovereign coins listed here make up a market that is truly world-class. They continue to be highly sought after by investors and continue to prove their value time and time again.

If you are interested in making any of these gold sovereign coins your next investment piece, Provident Metals has the selection you need. Check out our selection of gold coins or head to our Bullion Investment Guide to have your investment questions answered.