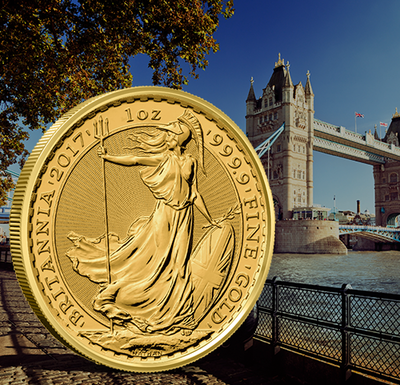 Since 1987, the British Gold Britannia has proven to be a popular gold bullion collection piece for investors.

What is a British Gold Britannia?

A British Gold Britannia is one of the signature gold coins produced for both investors and collectors by the United Kingdom. They are manufactured in a variety of sizes and denominations and were composed of an alloy of gold, silver and copper; the Gold Britannia now consists of .9999 fine gold. Gold Britannias are one of the most sought-after pressed gold bullion coins in the world, rivaling the American Gold Eagle for prominence and stature.

What are the dimensions of the British Gold Britannia?

The sizes of the Gold Britannia have changed over the years since they were first minted in 1987. A coin’s diameter is measured in millimeters, while the weight is measured by the amount of gold content, with copper and silver content adding to the overall weight.

What is the difference between the Gold Britannias and American Gold Eagles?

British Gold Britannias are essentially the same concept as the American Gold Eagle. Both are sought after by investors and collectors. However, the most obvious difference is superficial. American Eagles feature an image of Lady Liberty holding a torch and an olive branch on the obverse. The reverse displays an American bald eagle in flight.

The Britannia, on the other hand, shows the portrait of Queen Elizabeth II on the obverse. The image of Britannia, complete with her Corinthian helmet and Poseidon’s trident stands ready to protect the United Kingdom on the reverse side.

How many British Gold Britannias are minted each year?

The Royal Mint of England presses thousands of Gold Britannias each year according to availability of the metal. It produces both circulated and uncirculated coins. The volume varies from year-to-year but usually ranges in the thousands with a number specifically designed for the collectors’ market.

How much is a British Gold Britannia worth?

Traditionally, Britannias contain one troy ounce of gold with a face value of 100 pounds. However, since their inception, additional sizes from one-half an ounce all the way down to one-twentieth of an ounce at five pounds have been minted. The actual value of the precious metal, however, fluctuates with the changing market.

Can the British Gold Britannias be used as legal tender?

According to the Royal Mint, legal tender throughout the United Kingdom is based on the concept of both parties agreeing to payment of a debt. Essentially, anything considered a payment of said debt can be used regardless of denomination. That being said, it’s up to the receiving party to determine if the payment can be used. This means that standard retailers and financial institutions have no legal requirement to accept British Gold Britannias as currency despite being labeled with denominations.

Since they are manufactured by the Royal Mint, Britannias have one major benefit over other gold coins. They are free of value-added tax and capital gains tax in the United Kingdom. This means that the precious metals are not taxed for receiving Britannias and one does not need to pay tax on the increase in value as the market fluctuates. This is true in a vast array of countries, but when the Britannia travels to places like the United States, there may be some taxes added to the metal.

Are Gold Britannias a good investment?

Like any precious metal, Gold Britannias are considered a strong physical investment. While gold, silver, and other metals fluctuate in price, the fact that the coins are pressed increases their intrinsic value over simple gold bullion. Gold Britannias have increased in value even through financial hardships within the investment community. As the spot price of gold steadily rises over time, so do the value of these coins.

Where are Britannia coins minted?

Britannias are minted at the Royal Mint in the United Kingdom. Founded in 886 AD in Llantrisant, Wales, it is responsible for producing all British coins for use throughout the United Kingdom and its territories. It is owned by HM Treasury and guarded by the Ministry of Defense Police. In addition to coinage, it also produces medals for the military and other organizations.

Where can I buy and sell British Gold Britannias in the U.S.?

Gold Britannia coins are available for purchase throughout the United States from collectible coin retailers and certified online dealers. At Provident Metals, we buy and sell Gold Britannias along with other gold and silver coins.