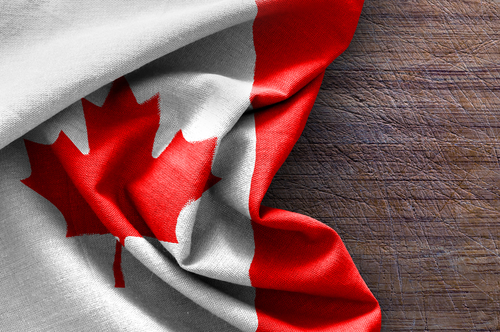 Below, you will find a brief history of the Royal Canadian Mint and its developments in coinage.

Until 1908, all of Canada’s coins were made by the Royal Mint in London. However, the opening of the British Royal Mint’s satellite branch in Ottawa changed history. Governor Earl Grey and Countess Grey opened the mint by striking Canada’s first bronze cent.

Around the same time, gold production in the Yukon and British Colombia was booming, and a refinery was in demand to help transform rough gold into gold that could be used for coins. Thus, the Royal Canadian Mint’s in-house gold refinery was created in 1911. This refinery proved very valuable to Great Britain, especially during World War I when Canadian-produced gold bars were used to pay British war debts.

In 1912, the Royal Canadian Mint began producing the “first truly Canadian gold coins,” which consisted of five-dollar gold coins and ten-dollar gold coins. These were the first coins to bear the word “Canada” and the Canadian coat of arms on their surfaces, which was a huge moment for the Mint and the nation.

The Ottawa Mint was still, however, under the observation of the British Royal Mint. It was not until 1931 that the Ottawa Mint and its entire operation became solely Canadian.

Expansion into the 20th Century 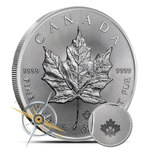 After the World Wars, Canada saw increased demand for coinage and found itself outsourcing its dime production to the United States Mint in Philadelphia. The need for an expansion was obvious, although it took several years to come about.

Finally, in 1976, the Winnipeg branch of the Royal Canadian Mint was established to manufacture bullion and other coins that were not intended for circulation, while Ottawa continued to produce circulated coinage.

Prior to the expansion, the Canadian government officially recognized the Royal Canadian Mint as a corporation. This meant that the Mint was no longer under the supervision of the Department of Finance and provided the Mint with more decision-making power.

Since the expansion, the Royal Canadian Mint has made leaps and bounds when it comes to advancing metal purity.

In 1999, the Royal Canadian Mint saw another world first, becoming the first Mint to develop a .99999 fine gold purity standard. 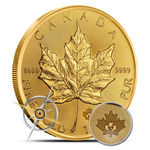 The Royal Canadian Mint began producing the Gold Maple Leaf in 1979, cast in 24 karat gold. The coin and its design were met with widespread praise, and it was decided that the coin was to be released on a regular basis.

Today, this particular coin is cast in .9999 fine gold and considered to be the purest gold bullion coin in the world.

After the widespread success of the Gold Maple Leaf coins, the Mint decided to release the Silver Maple Leaf in 1988. This coin is made with a single troy ounce of .9999 fine silver.

The Canadian Mint offers a comprehensive timeline of their other notable coins and dates on their website.

Today, the Royal Canadian Mint continues to produce not only the coinage for the nation of Canada, but striking bullion and commemorative coins as well.

In 2007, the Royal Canadian Mint successfully produced a bullion coin made of .99999 pure gold – the highest standard of coin in the world to date. That same year, the Mint released a 100-kilogram version of their Gold Maple Leaf bullion coin, which held a face value of $1 million. This coin was a world record breaker as the largest gold coin in the world.