The obverse of the coin features a restored version of the classic George Washington portrait, similar to the U.S. quarter originally designed and sculpted by John Flanagan. 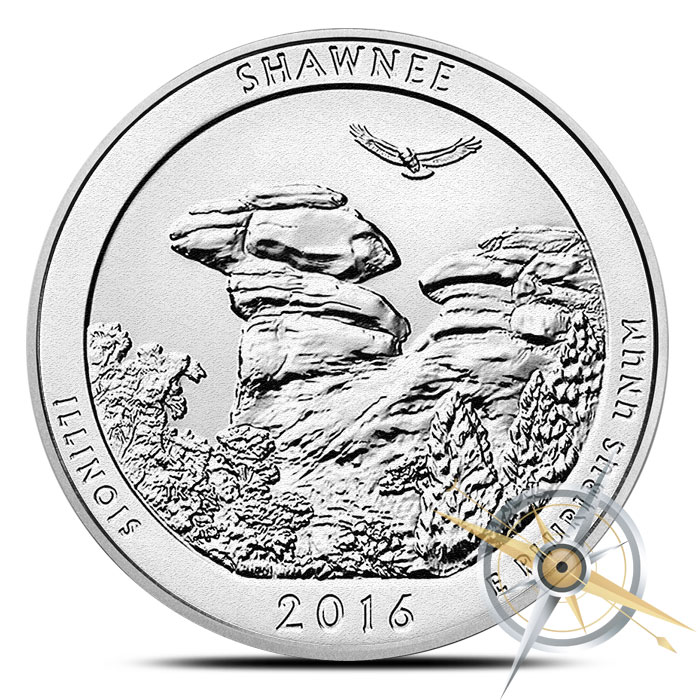 The reverse, designed by Justin Kunz, depicts Camel Rock amongst the vegetation. This sandstone formation lies in the Garden of the Gods recreation area, and is one of the area's most famous landmarks. In the air flies a red-tailed hawk.

The Shawnee National Forest was first established by President Franklin D. Roosevelt in 1939. Roosevelt created the park as a way to help prevent the area from experiencing any more deforestation and erosion that had been caused by extensive farming and logging. Once the Shawnee National Forest was established, an extensive seeding operation began to help the forest regrow.

That process continues today, and the forest remains a hub of conservation and dedication to protecting the environment.

The Shawnee National Forest design was the first America the Beautiful coin released for 2016, and is the 31st quarter out of 56 total in the collection.

As with the other silver bullion coins that make up the America the Beautiful Collection, the Shawnee National Forest coin is legally backed by the U.S. government, ensuring its high quality. As such, it is also available for inclusion in a certified precious metal IRA account. These highly collectible silver coins are also affordable and sold just over spot price. Get yours today to add value to both your precious metal portfolio and coin collection.

If you would like to invest in the Shawnee National Forest silver bullion coin, we can certainly help. Head to our inventory to check out the entire America the Beautiful Collection and see how you can make these commemorative coins an investment today.