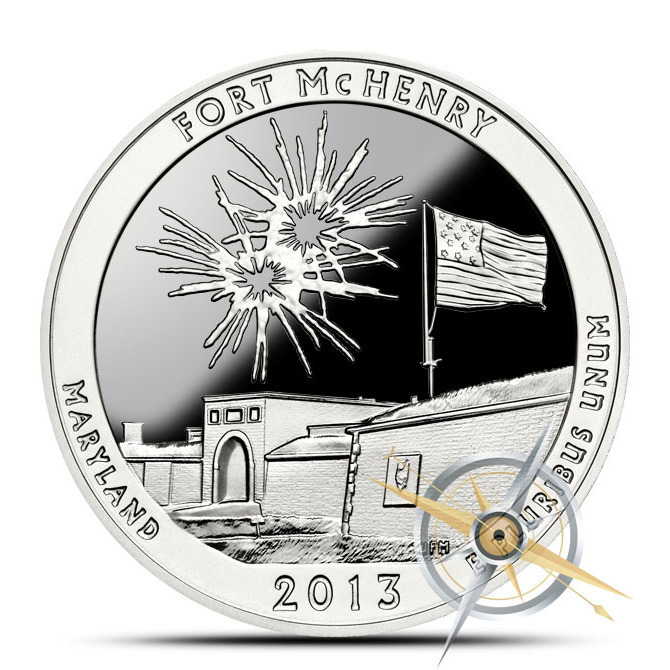 The reverse of the Ft. McHenry coin features a scene of Ft. McHenry during "Defenders Day", an annual event held at the fort to celebrate its importance during the War of 1812. Fireworks shine above, and inscriptions include FORT MCHENRY, MARYLAND, 2013, and E PLURIBUS UNUM.

Fort McHenry was used during the War of 1812 to protect Baltimore Harbor from British warships. On September 13, 1814, the British waged battle on Fort McHenry, with the fight lasting for around 25 hours. Fort McHenry managed to hold, and the British retreated.

Fort McHenry is famous for inspiring Francis Scott Key to write the poem "The Star-Spangled Banner", which would later become our country's national anthem. Key was a witness to the Fort McHenry battle, and was inspired by the American soldiers' determination to hold the fort.

Fort McHenry was finally named a National Monument and Historic Shrine in 1939, and brings almost 750,000 visitors a year to Maryland.

The Fort McHenry Silver Coin, like all coins in the America the Beautiful coin series, is produced by the US Mint, and consists of five troy ounces of .999 fine silver. The silver in each is sourced from the United States, and the United States government guarantees the weight and purity of each coin.

Because these coins are minted by a sovereign entity, recognized as legal tender, and guaranteed by the US government, each qualifies for a precious metal IRA.

Additionally, each design is minted for a short time, which limits the mintage of each. The quality and the limited mintage of these coins make them highly coveted by coin collectors.

Take a look at our selection of Ft. McHenry Silver Coins, and browse the rest of the America the Beautiful Silver Coins.