The front (obverse) of the Cumberland Gap silver coin features a restored version of the George Washington portrait by John Flanagan that is characteristic of United States Quarters. 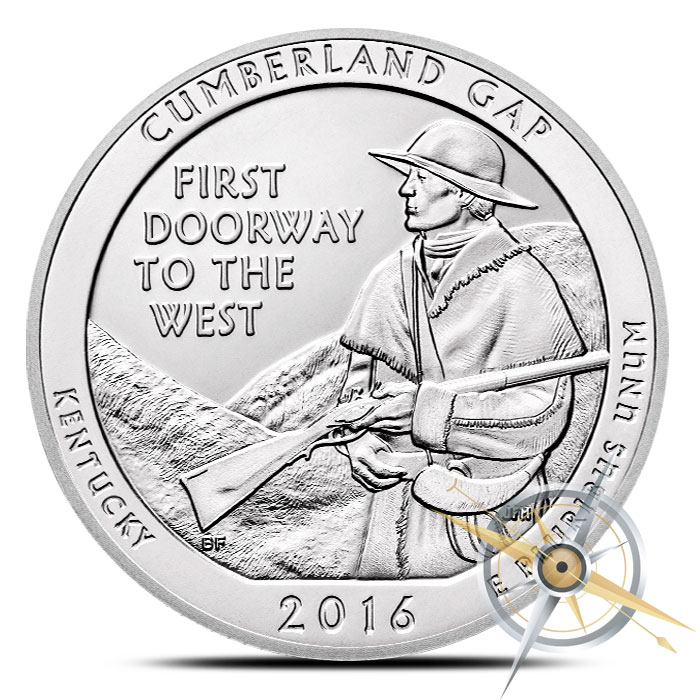 The back (reverse) of the Cumberland Gap coin, designed by Barbara Fox and sculpted by Joseph Menna, depicts a frontiersman carrying a musket and looking out over Kentucky's Cumberland Gap. To the left of the frontiersman are the words "First Doorway to the West".

The Cumberland Gap is considered to be the original gateway to the west for both Native Americans and early pioneers. The Gap sits within the Cumberland Mountains of Kentucky, Tennessee and Virginia.

The Gap was first explored in 1750 by English explorers and again in 1775 by Daniel Boone, who blazed a trail from the Cumberland Gap into the heartland of Kentucky. For centuries after, the Gap was used as a commerce point to bring goods over the mountains. The Gap was passed up, however, as proper roads began to be built.

The Cumberland Gap National Historic Park was founded in 1940. It encompasses 20,000 acres of forests and mountains and brings around a million visitors a year to the Kentucky hills.

As legally backed tender, the Cumberland Gap National Historic Park silver coin is a great investment for collectors interested in preserving a part of America's past with a beautiful coin composed of 5 ounces of 99.9% fine silver. This unique coin is also eligible for your precious metal IRA account.

Plus, you can purchase this coin for just over spot price, making it a highly affordable silver investment. Be one of the many investors who are buying this silver coin and adding it to their America the Beautiful collection.

Check out the Cumberland Gap National Historical Park silver bullion coin or browse the other coins we have available from the America the Beautiful Collection. The America the Beautiful Silver Coin Series represents an effort by the US government to offer a safe and secure investment that will help you protect your retirement portfolio from inflation. Each of these beautiful silver coins consists of five troy ounces of .999 fine silver. Each design has a limited mintage and is highly collectible. Invest in silver bullion today with the Cumberland Gap Silver Coin!