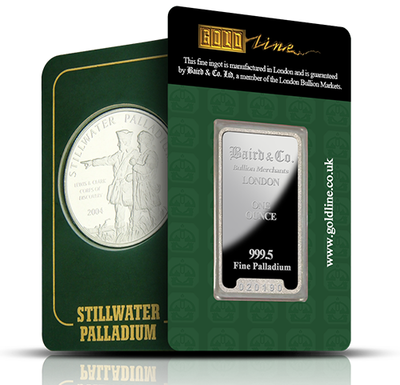 Palladium’s history is fairly brief compared to gold and silver, but its many uses make it one of the most desired metals in the world.

Even though palladium’s historical timeline is short compared to other precious metals like gold, silver, platinum and copper, its many uses and influences on modern society make it highly desirable around the world.

Palladium is a silver-white metal belonging to the platinum group metals (PGM). The PGMs also include platinum, iridium, rhodium and osmium. Palladium shares many similarities with platinum, though it stands out as being the softest, least dense, and having the lowest melting point of all the PGMs.

Palladium is number 46 on the periodic table and has the symbol Pd. It was named after the asteroid Pallas, which, in turn, takes its name from the Greek legend in which the goddess Athena mortally wounds Pallas in a friendly fight. Out of remorse, Athena erects a statue in Pallas’s image known as The Palladium.

Where is Palladium Located?

While it is possible to find palladium in nature, such deposits are rare. Production is also limited, with 84 percent of the global palladium supply being produced by two countries: Russia (44%) and South Africa (40%). Other top producers of palladium are Canada (6%) and the United States (5%).

Palladium was discovered in 1802 by chemist William Hyde Wollaston who, at the time, was experimenting with purifying platinum. He accidentally discovered palladium by dissolving platinum in a mixture of nitric acid and hydrochloric acid (called “agua regia”) and examining the residue. He decided to name the resulting element “palladium” after the recently-discovered asteroid Pallas. Instead of publicizing his new discovery, however, Wollaston decided to sell it anonymously and marketed it as “new silver.”

Suspicious of this unconventional marketing strategy, fellow chemist Richard Chenevix purchased his own samples for experimentation. He denounced the element as merely an alloy of platinum and mercury forcing Wollaston to reveal himself publicly in 1805 as the discoverer of palladium and demonstrate his findings.

After its discovery, palladium became popular as a treatment for tuberculosis. However, it caused many undesirable side-effects and eventually fell out of use. It was not until 1990 that it became popular again - this time with the auto industry for use in catalytic converters.

Although it was not very well understood at the time of its discovery, palladium now has many important functions in the modern technological age.

For one, it is similar enough to platinum that it can be used as a cheaper substitute. Its low toxicity means that it can also have a variety of uses. Palladium is primarily used in the auto industry, but it also has uses in electronics, dentistry, technological processes, photography, jewelry and investment.

The most common use of palladium is in catalytic converters for cars. It is also useful in hydrogenation, dehydrogenation, and petroleum cracking.

The second most common use of palladium is in electronics. It is used to coat the electrodes of multilayer ceramic capacitors which can be found in laptops and cell phones.

Palladium can be added in small amounts to dental instruments to increase their sheen and decrease corrosion. This quality also makes it useful in the making of surgical instruments.

Since hydrogen diffuses easily through heated palladium, the element is useful in the purification of hydrogen. It also reacts with carbon monoxide to form carbon dioxide and can be used in carbon monoxide detectors.

Hydrogen is a highly unstable element, making it difficult to store safely. Palladium combines safely with hydrogen to form the compound palladium hydride, and it offers a safe and efficient method of storing hydrogen fuels. At the moment, palladium is too expensive to explore this use much further, but the prospects are encouraging.

Palladium salts can be used in lieu of platinum in modern photography to create black and white prints.

Palladium has many uses for jewelers, especially considering its strikingly similar appearance to platinum at a much cheaper price. Since palladium does not tarnish at regular temperatures, it is a desirable metal in the jewelry industry. It can also be combined with gold to create the popular white gold.

Due to palladiums lower density, it is also more easily beaten and shaped into finer patterns.

One final perk for jewelry makers is the low toxicity of the metal, making it unlikely to cause allergic reactions in customers with sensitive skin.

In short, palladium is a versatile element with a fascinating history. While its existence was doubted at first, and it is not nearly as well known as its counterpart platinum, palladium is now used in many fields and industries, such as automobiles, technology, science, and fashion.

If you are interested in making palladium bullion your next investment, Provident Metals have options for you. Whether you want palladium for your IRA or just to add to your portfolio, we have you covered.