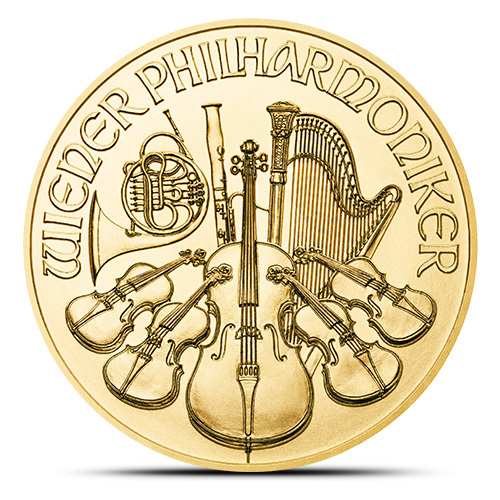 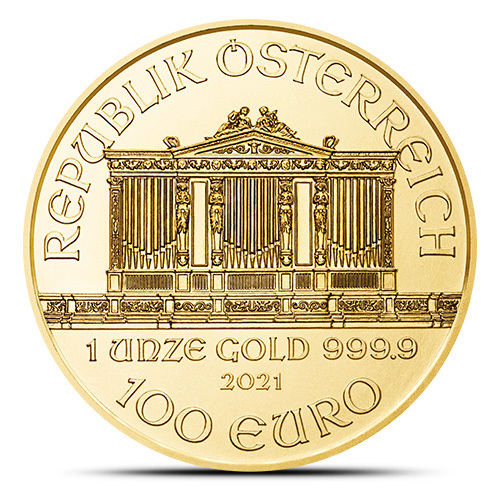 The Austrian Philharmonic 1 oz Gold Coin is a prominent series of gold bullion coins available to investors. This series boasts 1 oz, 1/2 oz, 1/4 oz, 1/10 oz, and 1/25 oz gold coins. Four of these five coins debuted before the 2002 shift from Austrian Schillings to the common Eurozone currency, the Euro. Issued by the Austrian Mint, the series is a favorite with investors.

On the obverse side of 2021 Austrian Philharmonic 1 oz Gold Coins, you will find an image of the Great Organ. This large pipe organ is found inside of the Golden Concert Hall, a venue also known as the Musikverein. The venue is where the Vienna Philharmonic Orchestra performs in the capital city and it is located in the Innere Stadt neighborhood of Vienna. The inscriptions on this face of the coin are in German, the official language of Austria, and read Republik Osterreich, 1 Unze Gold 999.9, 2021, and 100 Euro.

The reverse face of the 2021 Austrian Philharmonic Gold Coins includes a depiction of various musical instruments. Those musical instruments include a cello in the center, two violins on either side of the cello, a French horn in the left background, a bassoon right behind the cello, and a harp in the right background field. The inscriptions on this side read only Winer Philharmoniker.

Please feel free to contact Provident Metals with any questions. Our team is available at 800-313-3315, online using our live chat, and via our email address.