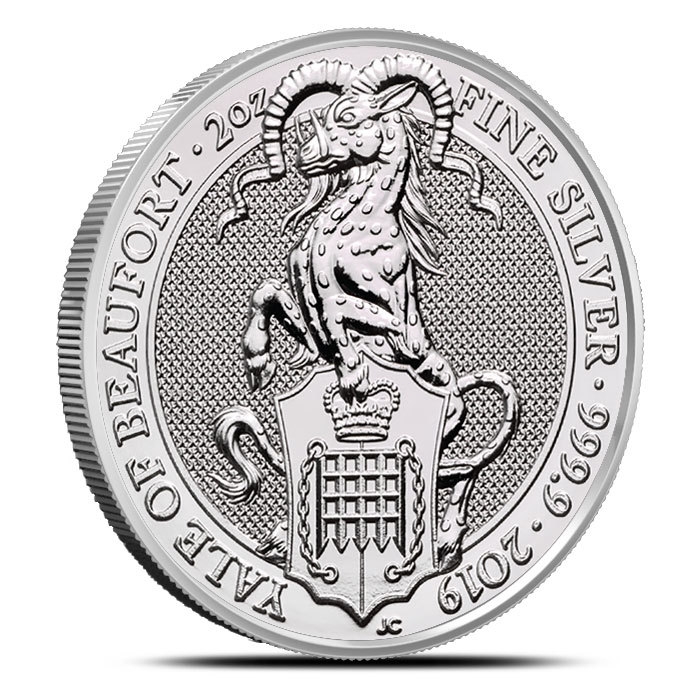 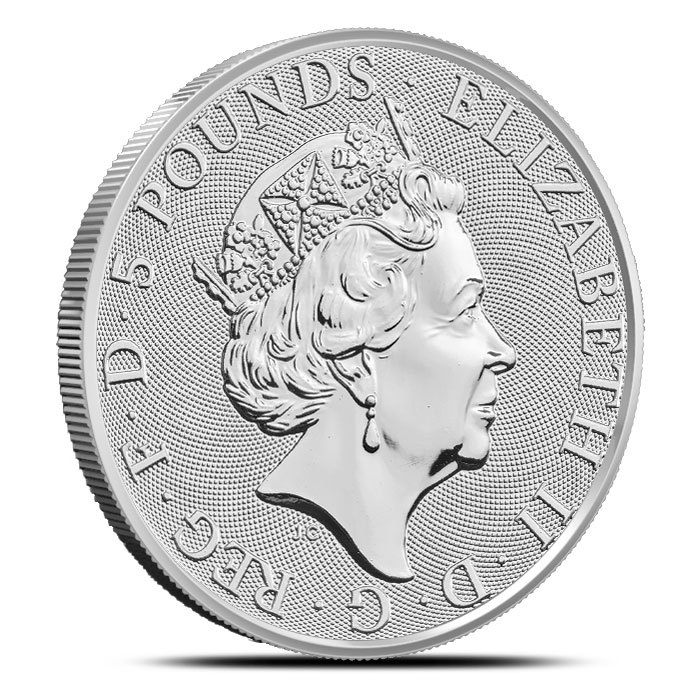 In Stock
IRA Eligible
Item is available and ready to ship!

At Queen Elizabeth II’s 1953 coronation, ten statues called The Queen’s Beasts stood guard at the entrance to Westminster Abbey. Each creature represented a strand of the young woman’s ancient royal heritage that passed to her on that historic day. In 2016, the Royal Mint reincarnated the ten royal guardians who stood guard that day in a beautiful new coin series called The Queen’s Beasts. Each new release explores one of these ten fantastical protectors and the centuries-old story they have to tell.

The seventh release in the Queen’s Beasts 10-coin series commemorates the regal Yale of Beaufort. The Yale was a mythical, antelope-like creature that was white with gold spots. It possessed the tusks of a boar and large horns that could swivel independently in any direction. The Yale passed to the Queen through Henry VII, who inherited it from his mother, Lady Margaret Beaufort. Each coin is intricately struck in 2 oz .9999 fine silver and bears a face value of 5 pounds backed by the British government. Add this stunning seventh coin in the Queen’s Beast series to your order today!

Designed by Royal Mint coin artist Jody Clark, the reverse features the Yale of Beaufort rearing up on its hind legs behind a shield. Its spots appear in relief, and its long, twisted horns are swiveled in opposite directions. The shield depicts a portcullis topped by a royal crown. A portcullis is a heavy, vertically-closing gate that fortified the entrances to many medieval castles.The coin’s weight, purity, year of issue, and “YALE OF BEAUFORT” encircle the image.

Each 2019 British 2 oz Silver Yale coin was produced at The Royal Mint, the world’s oldest and most renowned mint. The Royal Mint, whose roots extend over 1,100 years, holds a long and distinguished tradition of craftsmanship, history, and artistry. Today, the Mint remains the world’s leading manufacturer of currency, coinage, bullion, and medals.

Your 2 oz Silver Yale of Beaufort coin arrives in protective packaging. Orders of 10 or more coins come in tubes. Orders of 200 coins or more are packaged in Monster Boxes.Place your secure order online now by clicking on the product and selecting “add to cart”. Or, speak to one of our knowledgeable, friendly customer service representatives at 800-313-3315.

"The coin design itself is amazing and detailed. Probably 1 of my favorite of the 7 now. However, have an issue with the rims of the coin showing rubbed marks and the obverse and revers having scratches as well that are not aesthetically pleasing to the naked eye. No way to get even 1 of these sent in for grading. Hopefully better care is addressed when shipping. "