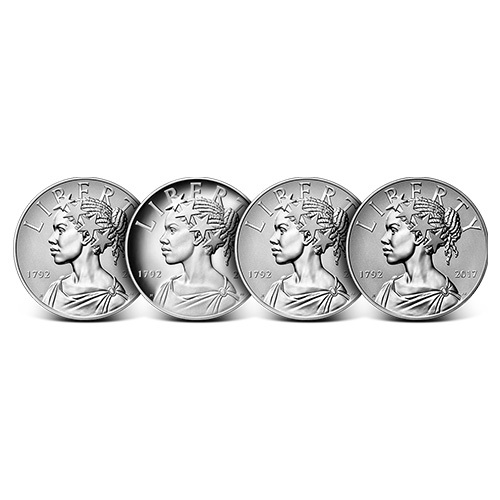 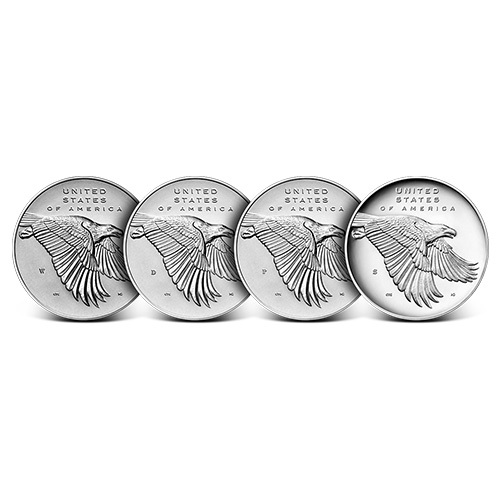 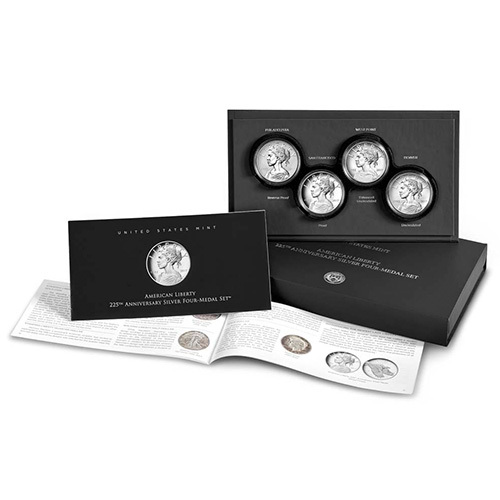 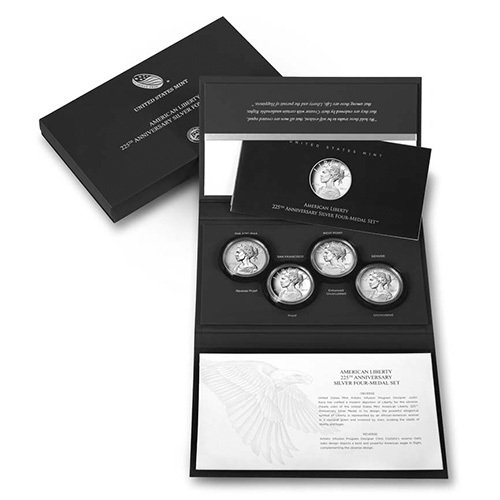 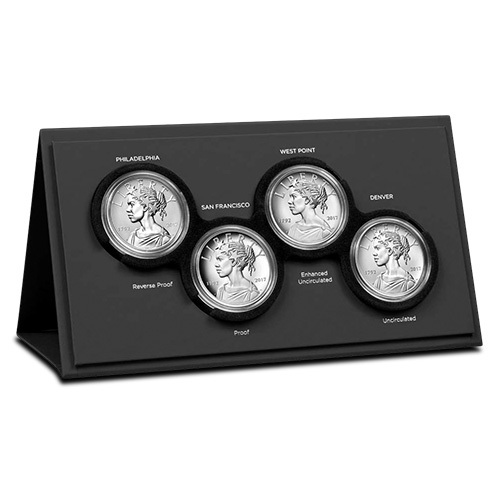 Out of Stock
Sorry! We're sold out right now.
NOTIFY ME
BUY BACK PRICE: $190.24
Add to WishlistLog In to add this product to your Wishlist

As part of its 225th-anniversary celebration in 2017, the United States Mint issued a variety of gold and silver bullion specimens. While the gold bullion coins were the most popular with investors and gold collectors, the most beautiful visuals came through on the 4-Medal Set that featured proof, reverse proof, uncirculated, and enhanced uncirculated medals. Today, you have the chance to get 2017 American Liberty 225th Anniversary 4-Medal Silver Sets online at Provident Metals.

The incredible 2017 American Liberty 225th Anniversary 4-Medal Set from the United States Mint celebrates the 1792 founding of the United States Mint. The medals available in this set include a proof, reverse proof, uncirculated, and enhanced uncirculated version of the medals. The proof has frosted elements and mirrored fields, while the reverse proof has mirrored elements and frosted fields. The uncirculated medal has matte visuals and the enhanced uncirculated medal has variable polished and frosted fields.

Liberty features on the obverse of the 2017 American Liberty 225th Anniversary Silver Medals in this listing. Designed by Justin Kunz, this vision of Liberty in left-profile relief marks the first time Liberty has been depicted as an African-American woman, reflecting the diversity of America. Liberty wears a crown of five-pointed stars from the bronze Statue of Freedom at the US Capitol Building. Inscriptions on this side of the medal include Liberty, 1792, and 2017.

An American bald eagle flies through the sky on the reverse side of 2017 American Liberty 225th Anniversary Silver Medals in this four-medal set. The design captures the image of the eagle flapping its wings with United States of America inscribed overhead. The silver medals have varying mint marks depending on the version in the set. The proof medal has an S mintmark from San Francisco, the reverse proof a P mint mark from Philadelphia, the uncirculated a D mint mark from Denver, and the enhanced uncirculated a W mint mark from West Point.

The United States Mint was founded in 1792 with Congressional passage of the Coinage Act of 1792. The Philadelphia Mint was the first branch facility and established in what was then the national capital. Today, the mint operates branches in Denver, San Francisco, and West Point. It previously had branch facilities in Dahlonega, Georgia, Charlotte, North Carolina, New Orleans, Louisiana, Carson City, Nevada, and Manila, Philippines.

Your 2017 American Liberty 225th Anniversary 4-Medal Silver Sets are housed together in a flip-open presentation case and housed in a protective box. The medals come with a Certificate of Authenticity.

Please dont hesitate to contact Provident Metals with your questions. You can call us on the phone at 800-313-3315, connect with us via our live chat, or email us.