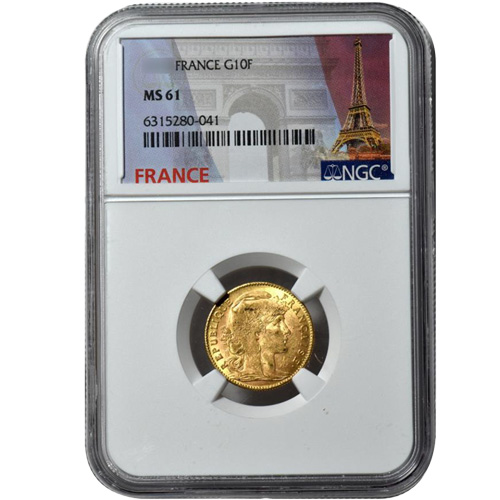 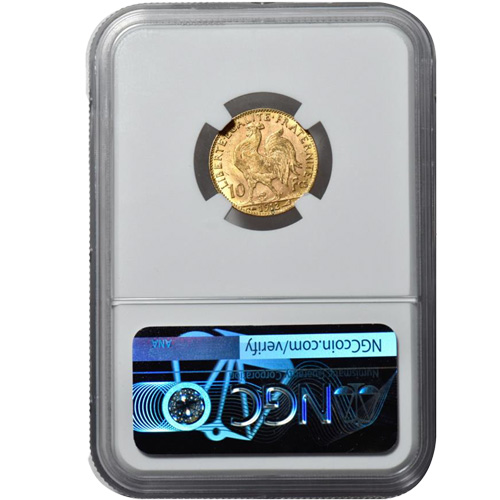 One of the final gold coin issues in France before the outbreak of World War I was the 10 Francs Gold Coin with the Marianne-Rooster design. Created by Jules-Clement Chaplain, this popular design featured two of the most iconic figures of the French nation on its obverse and reverse fields. One figure dates to the French Revolution, while the other is rooted in the history of France during the Middle Ages. Today, you have the opportunity to get 10 Francs France Gold Coins with NGC certifications online at Provident Metals.

The 10 Francs France Gold Coins available here mark the last circulation gold issues from the Third French Republic. The Third Republic was founded in 1870 following the downfall of Emperor Napoleon III and the 2nd French Empire. The Third Republic would survive World War I and last until the early years of World War II, effectively dissolving when Nazi Germany conquered the nation and occupied Paris.

On the obverse of 10 Francs France Gold Coins is a portrait of Marianne. The national personification of France dating to the French Revolution, she symbolizes liberty, equality, and reason, and her image is based on portrayals of the Goddess of Liberty. To this day, she remains prominent in French culture and features on government documents, French postage stamps, and Euro coins issued in France. This historic bust features her effigy in right-profile relief with a Phrygian cap and laurel wreath. The inscriptions read REPUBLIQUE FRANCAISE and JCC, the initials of designer Jules-Clement Chaplain.

The reverse side of 10 Francs France Gold Coins goes even further back in French history to draw inspiration from the Gallic Rooster. As early as the Middle Ages, the Gallic Rooster served as a national symbol of France. It features here in left-profile relief along with inscriptions of LIBERTE, EGALITE, FRATERNITE, 10 FCS, and the date mark.

10 Francs France Gold Coins offered here have possible date marks from 1900 to 1914, and possible grades from MS60 to MS62. Coins in this condition maintain a lustrous appeal with attractive, sharp details still present. There is no wear from circulation on these coins either.

Provident Metals does not guarantee the specific date or grade of the coin you receive. Each one is chosen at random after your payment clears, with our team selecting your coins based on availability in our warehouse at that time. If you buy multiples, you may get matching coins.

Please contact Provident Metals with any questions. You can call us at 800-313-3315, chat with us live online, or email us directly.