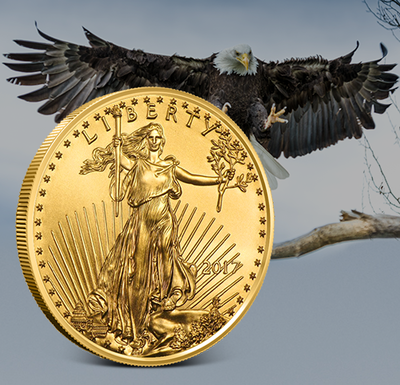 As one of the most sought-after gold coins in the world, the American Gold Eagle combines stunning design with a valuable metal.

The American Gold Eagle is one of the world’s most recognizable bullion pieces. Its beautiful design and metal purity make it wildly popular with collectors and investors alike. If you are considering the American gold eagle for your collection, here are the answers to some frequently asked questions.

What is a Gold Eagle?

First released in 1986, the American Gold Eagle is an official United States gold coin. Gold Eagles contain the equivalent of 22 karats of gold, which makes the coins 91.67 percent gold. The remaining materials are made up of 3 percent silver and 5.33 percent copper, resulting in a more durable coin.

How much is an American Gold Eagle coin?

Although the price of the American Gold Eagle coin fluctuates with the gold market, in 2017, they were available online in the price range of about $1,200 to just over $1,300 for a 1 troy ounce coin.

How many Gold Eagles are minted each year?

Each year the United States Mint manufacturers a different number of Gold Eagles. During its first year of production in 1986, just over 1.3 million 1 troy ounce Eagles were minted. In 1987, slightly over 1 million were minted. From 1988 through 1996, fewer than 25 percent of the initial releases were minted each year with production increasing in 1999 by nearly eight-fold over production numbers in 1996.

The number of minted coins dropped during the early years of the 21st century, but increased slightly until 2004, when it began to decline and continued to do so for the next three years. Beginning in 2008, production was up more than 500 percent over the previous year, but then decreased steadily for the next four years. Since 2012, the mint has produced an average of over 600,000 Golden Eagle coins each year.

How much does a Gold Eagle coin weigh?

American Gold Eagle coins are comprised of 91.67 percent pure gold by weight. They are available in four different weights:

Yes. The face value is on the reverse of the coin. However, the precious metal content in these coins is worth many times the face value.

Generally yes, considering the long-term rising value of precious metals - especially gold. Learn more about why you should invest in the American Gold Eagle.

What are American Gold Eagles worth?

Where are American Eagle coins minted?

All American Eagle Gold coins are minted at one of the United States Mint facilities. The first mint in Philadelphia opened in 1792. There are also minting facilities in Denver, San Francisco and West Point. The United State Mint’s headquarters are in Washington D.C., although no coins are produced there.

Where can I buy/sell American Gold Eagles?