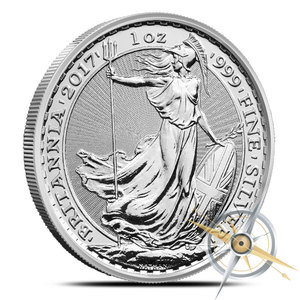 Each year, a different British artist—who must be approved by the Queen—is chosen to design their own take on the original standing portrait of Britannia by Philip Nathan. The coin’s 2013 artist, Robert Hunt, has emphasized the grace and classical tradition of Britannia as she dons a Roman robe with a Corinthian helmet and Neptune’s trident, staking her claim as “ruler of the waves.” An owl accompanies her to symbolize wisdom. 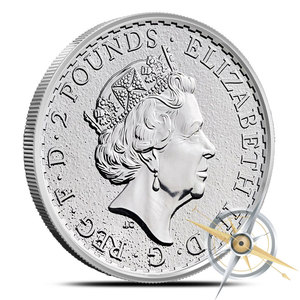 The reverse side of the Silver Britannia features the image of Her Majesty Queen Elizabeth II, the reigning monarch of England, encircled by her name and the legal value of the silver (2 British pounds).

The first Silver Britannia was minted in the U.K. in 1997 to celebrate the 10-year anniversary of the Gold Britannia coin. Since their introduction, each Britannia bullion coin has been made with a fineness of .958—until now. In 2013, the Royal Mint increased the purity to 99.9%.

Silver and gold coins from The Royal Mint are undergoing a change in purity from their traditional 95.8% to 99.9% fineness level. This new standard in British silver bullion makes the Britannia coin a valuable addition to your portfolio or collection.

Since Britannia is actually a figure dating back to ancient Roman times, the historical value of this coin is obvious. And combined with the raised silver content, this silver bullion coin is one you shouldn’t pass up. To learn more about investing in silver, please visit our blog and Knowledge Center. If you are interested in ordering silver coins like the Britannia, look through our website today for prices and availability on mints dating back to 1998.