The front (obverse) of the Shenandoah National Park silver coin features a restored version of the George Washington portrait by John Flanagan that is characteristic of United States Quarters. 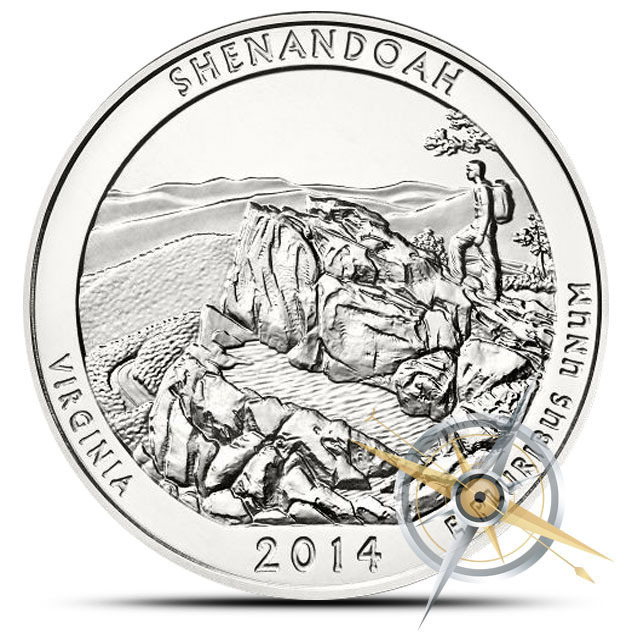 The back (reverse) of the Shenandoah National Park coin, designed by Phebe Hemphill, depicts a hiker standing atop Little Stony Man, a summit within the national park. The hiker is surveying the beautiful surrounding hills and forests.

The 1920's saw a push to open more national parks on the east coast near spots of high population. Centuries before, settlers and visitors alike had found the Shenandoah Valley a beautiful spot, and Congress soon authorized the Shenandoah National Park's creation in 1926 so long as the state of Virginia could purchase all of the necessary land.

Several farmers and others whose families had lived in the area for generations were forced out of the new park; however, many had suffered great losses due to the Great Depression and handed over their land willingly. With that, the park was officially established in late 1935.

Unfortunately, segregation was still required for all public facilities at the time of the park’s opening, and smaller, lesser campgrounds, picnic areas, and cabins were created for African American visitors. It wasn’t until 1950 that the park became fully integrated.

The America the Beautiful series proves to be popular for both casual and seasoned collectors alike. For one, it is available in both circulated quarters and silver bullion. This means that causal collectors can collect the coins without having to spend money or very much time.

On the other hand, the silver bullion coins are of higher quality, value, and a unique size for the experienced collector looking for great investment pieces. They are uncirculated and their fine silver content raises their value far past their $0.25 face value.

Check out the Shenandoah National Park silver bullion coin or browse the other coins we have available from the America the Beautiful Collection.