The front (obverse) of the Theodore Roosevelt National Park quarter features a restored version of the George Washington portrait by John Flanagan that is characteristic of United States Quarters. 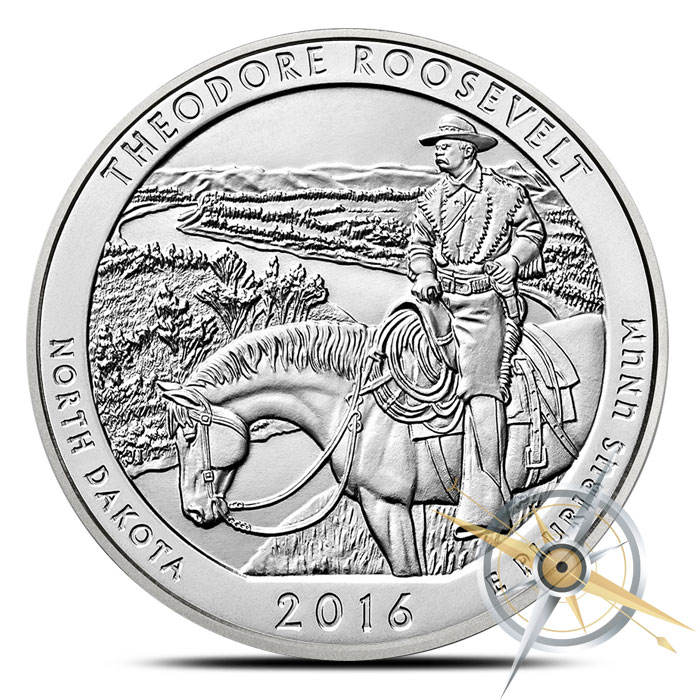 The back (reverse) of the Theodore Roosevelt National Park quarter, designed by Joel Iskowitz, features a President Roosevelt on horseback surveying the surrounding land and Little Missouri River.

Theodore Roosevelt made his first trip to North Dakota in 1883 to hunt bison and immediately fell in love with the area. Roosevelt was quick to invest in two ranches, settling in the North Dakota badlands, and his time out West greatly influenced his concern for conservation during his presidency.

After Theodore Roosevelt died in 1919, possible national park sites in the area were explored. An area of the North Dakota badlands that included Roosevelt's ranches was appointed as the Roosevelt Recreation Demonstration Area in 1935. It was not until 1947 that President Harry Truman established the area as the Theodore Roosevelt National Memorial Park.

While the circulated America the Beautiful quarters do not possess any value over their $0.25 face value, the collection is great for starter collectors or anyone that may not be willing to put in a lot of money to start. Since these quarters are in general circulation, a bit of digging can turn anyone into a collector.

The series is also available in uncirculated silver bullion, each of which comes with a certificate of authenticity with purchase and is backed by the U.S. Mint. The bullion coins' 0.999 silver content makes it a more valuable investment and collector's item.

Check out the Theodore Roosevelt National Park silver bullion, or browse the other coins we have available from the America the Beautiful Collection.