The front of the Great Basin National Park coin displays a classic, restored portrait of George Washington. This portrait is by John Flanagan and is common to all United States quarters. 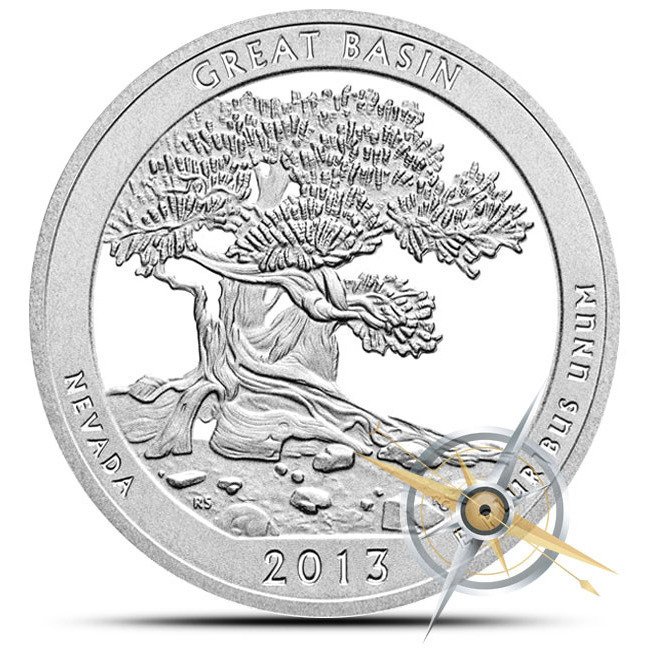 The reverse of the Great Basin National Park coin features a Bristlecone Pine tree - a symbol of the park. The pine is perched atop a glacial moraine where such trees typically grow. Inscriptions around the image include GREAT BASIN, NEVADA, 2013, and E PLURIBUS UNUM.

It is estimated that Native Americans first settled in the Great Basin region around 10,000 years ago. This region encompasses the area between the Sierra Nevada Mountains and the Wasatch Range of Utah. It is known for its numerous valleys (or basins), rivers that flow inland, and Bristlecone Pine trees, some of which are around 3,000 years old.

The area was not made an official national park until October 27, 1986. The park receives more than 100,000 visitors a year for its many hiking trails, campsites and panoramic glacier views.

The ATB series has proven popular over the years and is desirable by both casual collectors and dedicated investors. The uncirculated coins feature 0.999 pure silver, which means their true value rises high above their $0.25 denomination. This makes these 5-ounce silver coins great investment pieces.

Additionally, the ATB series can also appeal to those not looking to spend money on a collection since the circulated quarter versions can be collected for free with a bit of time.

Check out the Great Basin National Park silver coins we have for sale, or browse the other America the Beautiful Coins we have available.