The front (obverse) of the Everglades National Park coin features a restored version of the George Washington portrait by John Flanagan that is characteristic of United States Quarters. 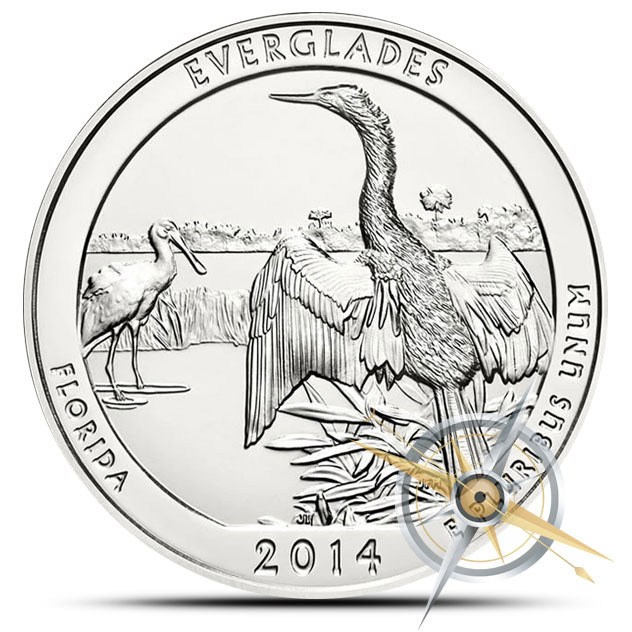 The back (reverse) of the Everglades National Park coin, designed by Joel Iskowitz and sculpted by Joseph Menna, depicts a bird native to Florida, the anhinga, spreading its wings with a roseate spoonbill standing close behind. The two birds are standing amidst the famous Everglades wetlands.

The diverse, wetland area of the Everglades has been inhabited by humans for thousands of years, beginning with Native American tribes and eventually leading to settlers. Beginning in the 20th century, attempts to drain and develop the Everglades area began. The drained water began to wreak havoc on the ecosystems and food webs that once thrived in the area.

Attempts to preserve at least portions of the Everglades also began in the 20th century, and after much research, the House of Representatives voted to move forward with a national park. Everglades National Park was dedicated by President Truman on December 6, 1947 and is the first park created in order to protect a fragile ecosystem.

The America the Beautiful series has become popular with both collectors and investors for a number of reasons. Firstly, the collection appeals to many due to its availability in both circulated coinage and uncirculated bullion. Circulated coins can be collected cheaply by casual collectors, while the silver bullion option appeals to those seeking intrinsically valuable pieces.

Additionally, the silver bullion coin's weight, unique size, and beautiful designs make it a popular choice. Its silver content makes its worth far surpass its $0.25 denomination and, therefore, presents the opportunity for investment.