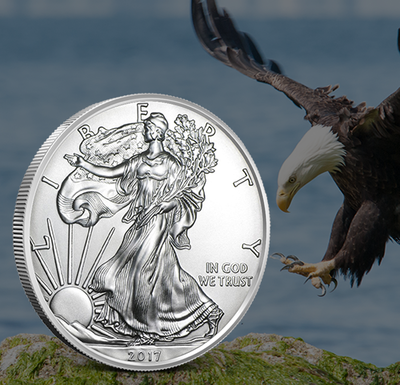 First released in 1986, the American Silver Eagle has become one of the most popular U.S. collector coins.

On November 24th, 1986 the first American Silver Eagle was released by the United States Mint. Since then, it has been a favorite among coin collectors and silver bullion investors worldwide. If you are thinking about investing in these coins, here is what you should know to get started:

What is an American Silver Eagle?

The features an eagle behind a shield. In the eagle’s left talon are arrows and in the right talon is an olive branch. Thirteen stars, representing the original thirteen colonies, are above the eagle. The reverse also features the inscriptions “1 Oz. Fine Silver,” “One Dollar”, and “United States of America”.

Where is the mintmark on the American Silver Eagle?

The mintmark for the American Silver Eagle is on the reverse of the coin below the eagle.

How many American Silver Eagles are minted?

Each year, the number of American Silver Eagles that are minted changes. In 1986, almost 7 million coins were produced; in 2015, over 47 million were minted. Almost 463 million were minted from 1986 to 2015 - including almost 20 million proofs and 2.5 million uncirculated coins.

The Silver Eagles have been produced by the Philadelphia Mint, the West Point Mint, and the San Francisco Mint. The Mint stopped selling American Silver Eagles after only one week of sales in January 2013 and 2015 due to the high demand. This was due to the drop in the price of silver that increased the demand for silver coins.

How much does a Silver Eagle weigh?

The coins weigh one troy ounce and are made of 99.9% pure silver.

The American Silver Eagle coin has a tender value of $1. It is possible to use this coin as legal tender, but because the value of the silver greatly exceeds the face value of the coin, this is not recommended.

Silver is considered a precious metal like gold and has a value that fluctuates. Precious metals are viewed as a safe investment in times of crisis. Their price has a positive correlation to inflation. It is recommended that an investment portfolio includes 7-15% precious metals in order to reduce risk through diversification and to improve returns. Most investors agree that silver and other precious metals are good investments during both good and bad economical markets.

Purchasing silver is not taxed in the United States, unless it is at the state level, nor is the sale if it is sold at a loss. If it is sold for a profit, a federal capital gains tax will apply. Since there are no records or annual registration of ownership, there is no annual tax on the silver you own.

How much are Silver Eagle coins worth?

Where can American Silver Eagles be bought or sold?

There are many places you can purchase Silver American Eagles. Both online dealers and brick-and-mortar stores will likely have a good selection. Make certain to check the current market value of silver and compare it to the price they are asking. As a rule, however, online dealers like Provident Metals are able to offer Silver Eagles at a lower price than brick and mortar shops.

Since their release, these American Silver Eagles have been a favorite collector’s item. They have been proven over the years to be a sound investment in all market conditions. Provident Metals offers the best buy back prices in the industry!

If you would like to purchase your own American Silver Eagle, Provident Metals has what you are looking for. Check out our online inventory of silver eagles or head to our Knowledge Center to learn more about these and other silver bullion coins.