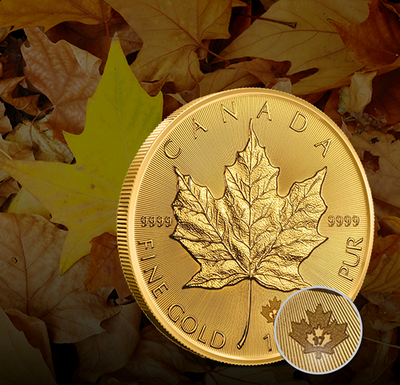 The Canadian Gold Maple Leaf coin is one of the purest gold coins on the market today, and they are highly valuable to collectors and investors.

Minted by the Royal Canadian Mint, the Canadian Gold Maple Leaf coin is one of the purest gold coins in the entire world. Here are answers to some of the most frequently asked questions about this beautiful coin.

What is a Canadian Gold Maple?

The Canadian Gold Maple is a gold bullion coin that consists of 0.9999 and 0.99999 fine gold. The coin is manufactured by the Royal Canadian Mint, which is responsible for the production of all major Canadian coins in circulation. The Government of Canada issues the Gold Maple coin annually. In fact, Canada was the first country to issue a standard gold coin. Also, the coin’s high gold concentration makes it one of the most valuable gold coins in the world.

There are a total of six different variations to the Gold Maple Coin. Each variation differs in size and face value, from the standard $50 1 oz coin to the smallest worth $0.50.

What is the difference between a Canadian Gold Maple and American Gold Eagle?

The main difference between the Canadian Gold Maple and the American Gold Eagle is the issuing country. As the names suggest, the Gold Maple and Gold Eagle are produced in Canada and the United States respectively. Each coin is only recognized as legal tender. The Gold Maple was introduced six years prior to the Gold Eagle.

How many Canadian Gold Maples are minted each year?

The exact number of Canadian Gold Maples minted each year varies. The Royal Canadian Mint has not released mintage numbers for the Gold Maple since 2013, so this data is unknown for the most recent years.

How much is a Canadian Gold Maple worth?

The legal tender value of a Gold Maple varies by size between $0.50 to $50 Canadian dollars, but the market value greatly exceeds the tender value, and is determined by the spot price of gold.

The Gold Maples are recognized as legal tender in Canada. It is important to remember, however, that the gold in Gold Maples is worth more than the face value of $50.

All questions regarding the taxation of Canadian Gold Maples or any gold bullion should be referred to a tax professional. Countries vary in their tax laws regarding investment in precious metals. Generally, income derived from precious metals held for less than a year is taxed as normal income. However, specific tax laws can change depending on a variety of factors. It is critical for interested investors to consult professionals in regards to specific tax laws.

Gold Maple Coins make a great investment for several reasons. Primarily, the high-quality gold content found in these coins make them excellent investment pieces. The value of gold has continued to rise steadily over time. While recessions and other economic instability can cause the value of monetary investments to dwindle, investments in gold generally have an inverse relationship with the economy and are consequently a great hedge against inflation. Furthermore, Gold Maple coins are manufactured, recognized, and guaranteed by the Canadian Government.

Where are Gold Maples minted?

The Gold Maple coins are produced by the Royal Canadian Mint. They are released annually by governmental decree. The RCM has plants all over the country of Canada that are responsible for producing the coins in circulation. The Gold Maple Coins are minted in a select few of these RCM plants.

Where can I buy/sell Canadian Gold Maples in the U.S.?

Technically, Canadian Gold Maples can be bought and sold anywhere in the United States. However, it is most advisable to sell and purchase from registered and reputable gold bullion and coin dealers. These professional companies can be found online and throughout the United States.

If you would like to make the Canadian Gold Maple the next piece of your collection or investment portfolio, Provident Metals has several options - including varying weights and denominations for your choosing. If you would like to learn more about investing in precious metals bullion, head to our Knowledge Center.