The front (obverse) of the Bombay Hook quarter features a restored version of the George Washington portrait by John Flanagan, which is characteristic of United States Quarters. 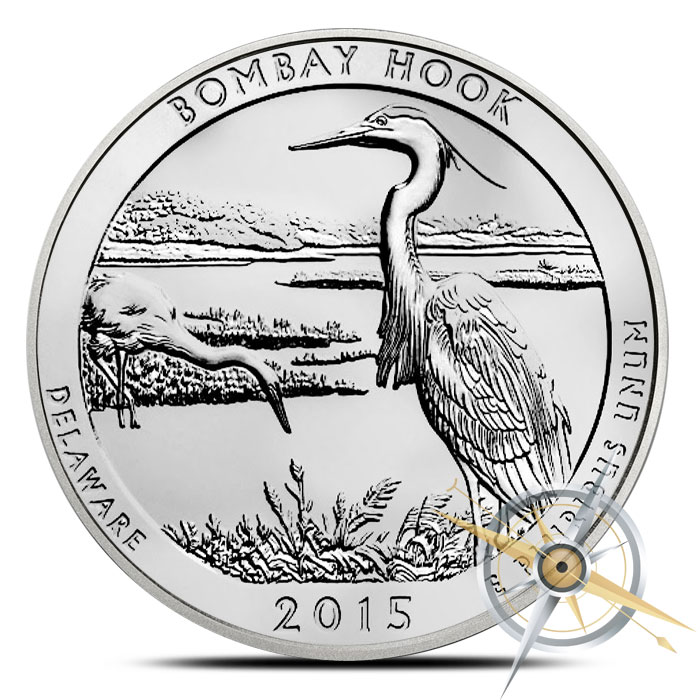 The area that is now known as the Bombay Hook National Wildlife Refuge was originally known as "Canaresse" by the Native Americans, which means "at the thicket". Later, the Dutch renamed the land "Boompjes Hoeck" which later became Bombay Hook.

The area became popular for tourists in the 1800's, but a severe storm in 1878 destroyed the resorts and completely changed the wildlife habitats in the area. The marshes that were once protected by dunes were now subject to destruction.

The Bombay Hook National Wildlife Refuge was established on March 16, 1937 in order to provide a safe haven for the breeding and migration of fowl on the Atlantic Flyway. Since then, the refuge has provided all sorts of wildlife with sanctuary including all migratory birds. The refuge is also a stop on Delaware's Coastal Heritage Greenway.

Both the America the Beautiful quarters and silver bullion coins are popular options for both amateur and experienced coin collectors. The circulated quarters are not worth much more than their face value; however, the uncirculated silver bullion coins are composed of 99.9% fine silver and valuable as a precious metal investment. The Bombay Hook silver coin is also eligible for precious metal IRA accounts.

The US Mint has provided a safe and collectible investment tool that will help protect your other investments from inevitable inflation. Each America the Beautiful Silver Coin consists of five troy ounces of .999 fine silver that is certified and guaranteed by the United States government. Protect your investments, and your financial future with the Bombay Hook Silver Coin!

Check out the Bombay Hook Wildlife Refuge silver bullion coin or browse the other coins we have available from the America the Beautiful Collection.