George Washington's portrait is present on each United States Quarter, and the George Rogers Clark coin is no different. This portrait was designed by John Flanagan. 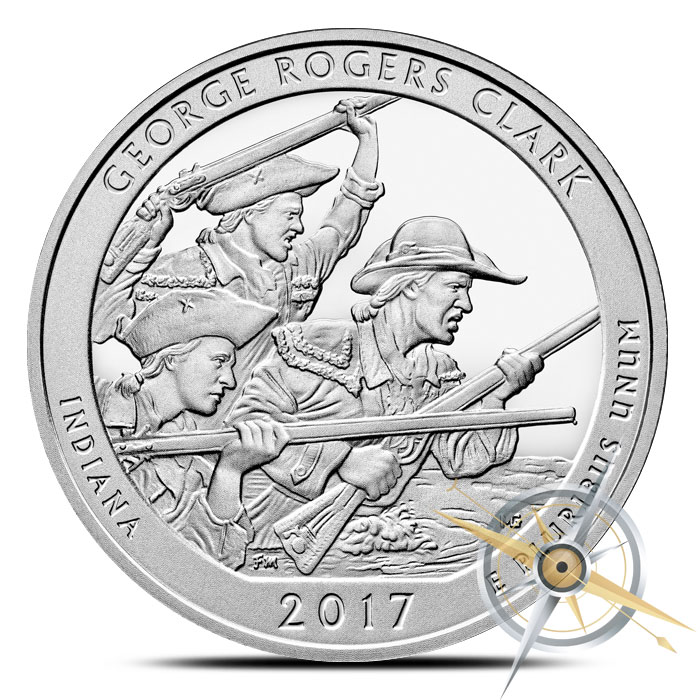 The reverse of this coin features George Rogers Clark leading a group of frontiersmen to regain control of Fort Sackville from the British. Surrounding the frontiersmen are the inscriptions "GEORGE ROGERS CLARK," "INDIANA," "2017," and "E PLURIBUS UNUM."

The George Rogers Clark National Historical Park commemorates the bravery of Lieutenant Colonel George Rogers Clark during the American Revolution. Clark and his men captured British posts along the Mississippi River and caused the surrender of Fort Sackville in 1779 after marching over 150 miles in harsh winter weather.

Located in Vincennes, Indiana, the historical park and memorial sits on 24.3 acres. It was completed in 1936 and dedicated by President Franklin D. Roosevelt. The historical park sees upwards of 140,000 visitors per year.

The America the Beautiful Coin series appeals to traditional silver investors and coin collectors. Each of these beautiful silver coins consists of five troy ounces of investment grade, .999 fine silver. And because these coins are minted by the US federal government, the weight and purity of each is guaranteed. Consequently, America the Beautiful silver coins may be included in a self-directed precious metals IRA.

And because each design is minted for a limited time, each has a limited mintage, which makes them more attractive to collectors and valuable on the secondary market.

The America the Beautiful 5 oz silver coin series is a great opportunity to invest in guaranteed .999 fine silver. Each coin celebrates one of the United States National pArks, Monuments, or Historical Sites. The George Rogers Clark National Monument ATB is a great addition to your silver bullion collection.