1 oz Silver World of the Dragons Series The Aztec Round 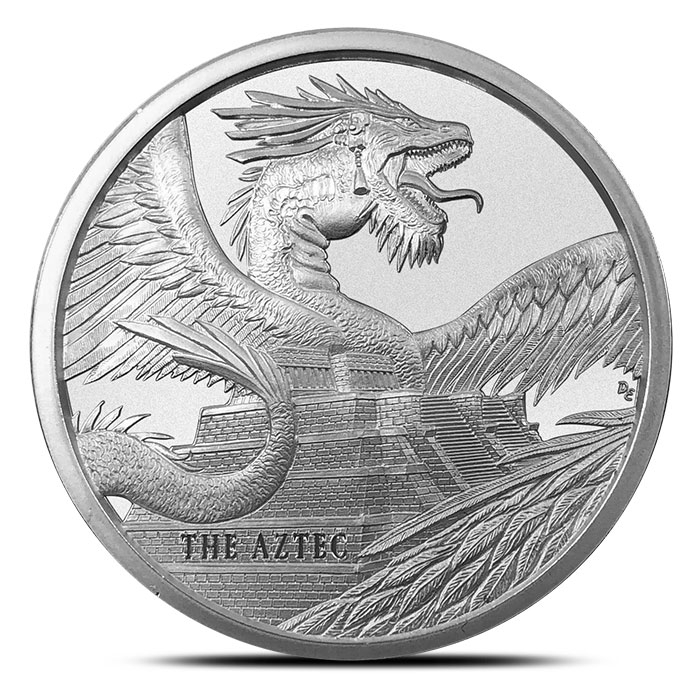 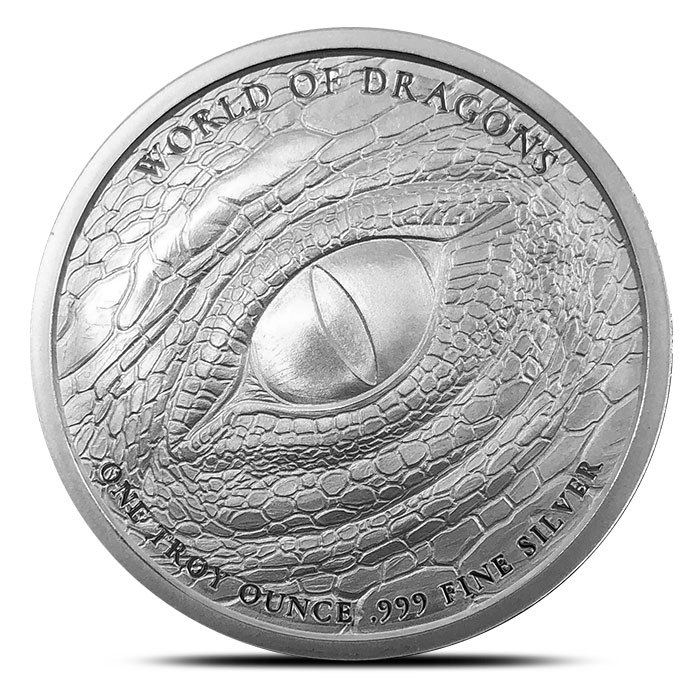 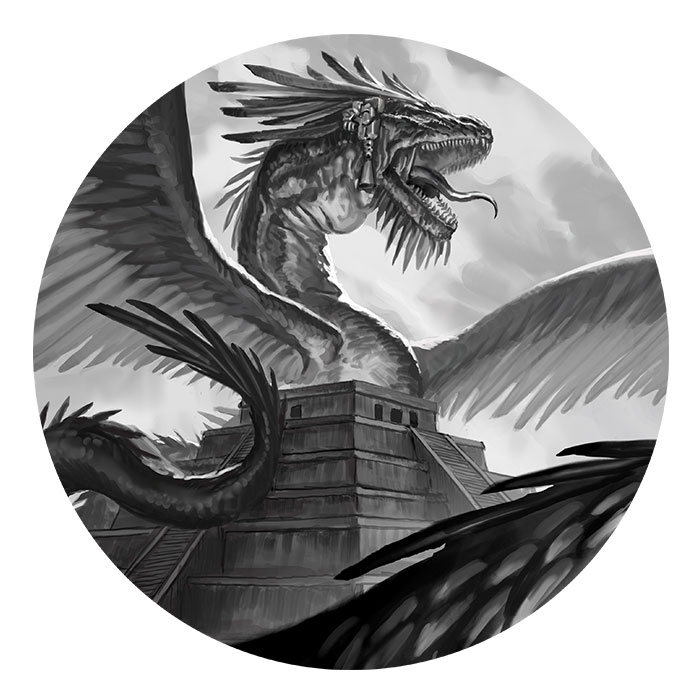 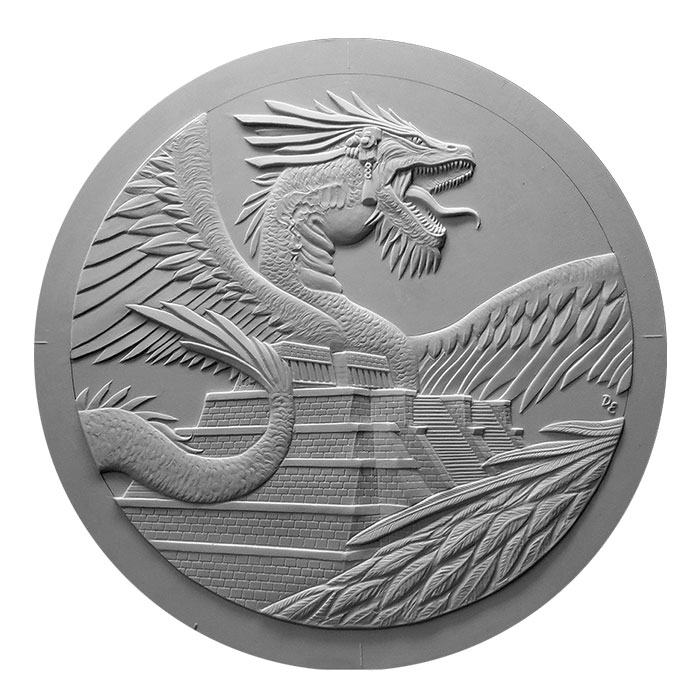 2. Here are more details from our December email where we gave an Aztec Dragon update:

A. You asked, and we listened! We don’t want your orders for the 2nd release delayed because we’re waiting on delivery from the mint for the final run of the 1st release (like we experienced with prior series such as the 4 Horsemen, Zombucks, etc). So here is how we will do things differently this time:

About The Aztec 1 oz Silver Round

In ancient cultures, stories about heroes and monsters were an important part of everyday life. They helped people explain objects in the sky, make sense of weather events, or answer life’s big questions. Born around the fire and evolved through word of mouth, tales of these creatures and their supernatural powers were told and retold millions of times from person to person, from trade port to trade port, and from generation to generation – manifesting into a hundred different versions around the world.

The story of the dragon is no different. Dragons have been one of the world’s most popular mythological creatures through the ages, and they continue to stir our imaginations to this day. Almost every culture on earth has its own ancient dragon myth. And we are proud to bring them to life in our new, EXCLUSIVE World of Dragons series in 1 oz silver and copper rounds!

The first release in this exciting 6-design series celebrates one of the earliest recorded dragon myths in history. The limited-edition Aztec Dragon design celebrates Quetzalcatl, one of the most revered gods in ancient Mesoamerica. A powerful combination of bird and rattlesnake, this feathered serpent was believed to have organized the original cosmos, participated in the creation of mankind, and was related to gods of the wind, the rain, and the dawn. Aztec high priests would even include the name Quetzalcoatl in their titles to denote their high rank.

This limited edition 1 oz Silver Aztec Dragon round will be minted to demand through January 2019. So hurry and add the first release in the series to your cart today, while they’re still available!

The obverse of the 1 oz silver Aztec Dragon round features the fierce Quetzalcoatl ascending from the Temple of the Feathered Serpent. Its feathered wings and serpent tail are poised to take flight to offer protection over the Aztec people. Inscriptions “The Aztec” and the artist’s initials also appear on the obverse.

The Dragons of the World series is produced by the privately-operated Golden State Mint (GSM). Since 1974, the Golden State Mint has manufactured millions of rounds and bars for bullion dealers across the nation, with a silver purity that equals that of sovereign-minted rounds. GSM is a life member of the American Numismatic Association, along with several other well-respected numismatic organizations. GSM is a family company dedicated to stellar customer service, and remains one of the most highly-regarded popular private mints in the industry today.

Your 1 oz silver Aztec Dragon round ships in brand new condition. Single rounds ship in individual plastic flips. Multiples of 20 ship in mint-issued tubes, and multiples of 500 ship in sealed monster boxes. Orders over $199 are eligible for free shipping!

Add this Air-tite Plastic Coin Holder to your order to protect your round for years to come or give a gift in style!

Dragons of the World Silver rounds make thoughtful and valuable gifts! Order the 1st release in the series today while it’s still available!

20 Review(s)
Please or to write a review.

"It\'s a nice piece. I rate it equal to the Egyptian, higher than Chinese and Indian, but lower than the Norse and Welch Dragons. "
Timothy from - March 12, 2019

"Awesome coin! Going to be an awesome series. Excited to catch them all. Provident always contracts the coolest rounds. "
James from - March 02, 2019

"Bought these for my granddaughter, whose a huge Dragon fanatic. She loves them."
Cody from - February 16, 2019

"I really like this round! Both sides are very cool! This series is going to be very exciting! "
Michael from - January 02, 2019

"dragon round came in just before xmas and was very nice. I can't wait to collect the entire Aztec Dragon series"
Leon from - December 26, 2018

"Even with delays I received the Dragon round before Christmas . Not for sure what happened while placing my single oz purchase. While checking out on 1st attempt got msg. that I had the wrong expiration date ? On second attempt same result even though I was very careful when entering the # ? On 3 attempt just got msg. My order did not go through ? Finally the order made it . I checked my email & was charged 3 times for the one order . The problem was rectified to my satisfaction & still received my purchase before Christmas . Now that's what I call exceptional customer service. My round of the Aztec Dragon is a superb example of how the private mints has really stepped up there efforts to produce fine rounds . Golden State Mint has kept up with technology to provide superior products for our enjoyment . The piece I received was faultless with a clean strike . Great combination of mat & proof like finish which adds greatly too the eye appeal of this round . Hope everyone had a blessed Christmas ! Peace , Love & Happiness Leon/ Ky "
RONALD from - November 30, 2018

"I'll be getting the whole set of these coins ... Love this first edition...can't wait for second release ..must must have for personal collection"
Roberto from - November 14, 2018

"This round is a cut above your routine artistic round. It's going to be a pleasure to collect this series."
David from - November 12, 2018

"The artistry is fantastic and puts to shame many bullion coins. The teeth and the roof of the mouth detail is incredible. All on a once ounce round. Bought 2. Now looking to buy a tube of 20 for collectors value. I just hope the other five coins in the series have the same great artistry. "
Troy from - November 08, 2018

"Purchased both the copper and the silver rounds. Amazing detail, crisp lettering, nice character. Initial release will be hard to top. Would like to see multi-finished... or a offering of the art."
Richard from - November 06, 2018

"Received my dragons today, 2 silver and 4 copper. What an amazing looking coin. My youngest son has not seen them yet (Christmas Present) but he loves dragons and will love this coin. Great addition to our ever growing collection. "
Lawrence from - November 05, 2018

"Received 1 oz.silver and 1 oz. Copper Rounds today.thanks for the fast shipping.Rounds are a nice addition to my stack.Also Aztec will be my next tattoo.....Stack On !!!"
Cornell from - October 20, 2018

"I would love to see a 10 coin tube offer. I may consider getting 10 of each series. Salivate Metal did a great review on YouTube. ( Idea) How about a Greek/Roman gods' series. I think the Dragon image will get a little old on coins after this offering."
Cynthia from - October 18, 2018

"I totally agree with everything that Trent said! I love the Egyptian series and am looking forward to the World of Dragons! So excited!"
Trent from - October 17, 2018

"Great job AGAIN! I am super excited about this new series. Provident continues to deliver on the creative rounds. I buy silver mostly to enjoy the art. For me, it's like buying limited edition reprints from my favorite new artist. Thanks Provident!!!"
Jack from - October 17, 2018

"Only problem for me; too many times staring into vertical-slit eyes, I'll have to keep them obverse up. But the artistic imagination of a former sculptor, runs riot with future releases possibilities. Got promise in this series. Three month mintage window limit, same as my 4 Horsemen; I'm in!"