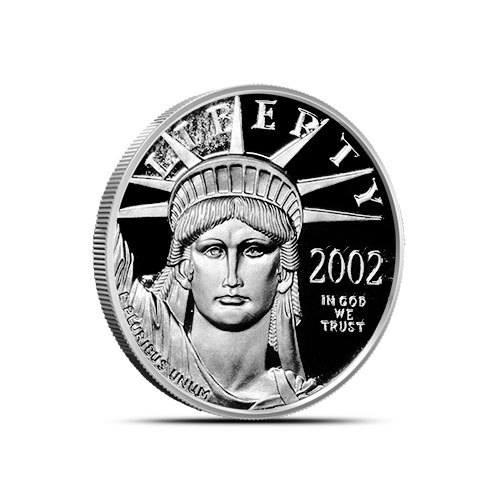 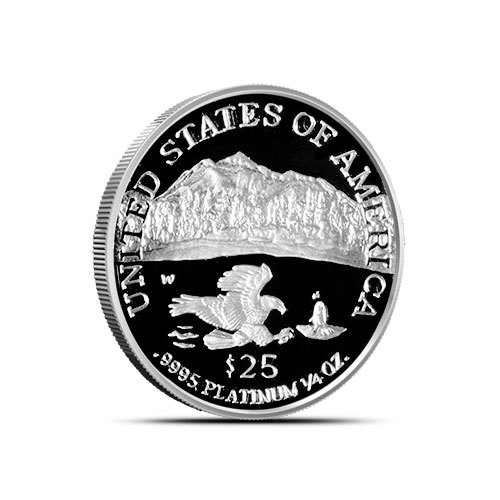 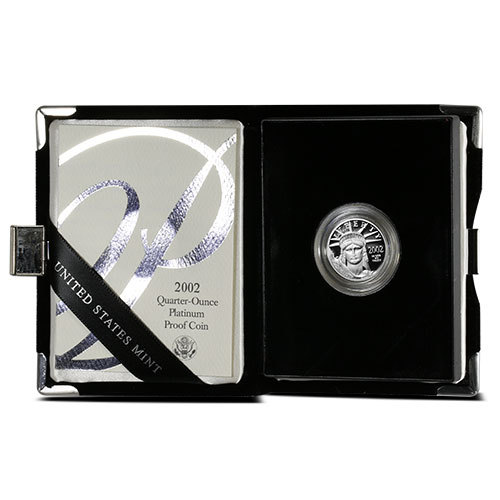 Out of Stock
Sorry! We're sold out right now.
NOTIFY ME
BUY BACK PRICE: $336.55
Add to WishlistLog In to add this product to your Wishlist

Introduced by the United States Mint in 1997, the American Eagle Platinum Series launched with Brilliant Uncirculated and Proof coins in 1 oz, 1/2 oz, 1/4 oz, and 1/10 oz platinum options available. After the 2008 release, the fractional-ounce coins were suspended in both collections indefinitely and have yet to return to production. The 1 oz BU coin was not issued from 2009 to 2013 or in 2015, but has been available again annually as of 2016. The 1 oz Proof coin remained in production throughout.

On the obverse side of Proof American Eagle 1/4 oz Platinum Coins is the Statue of Liberty. In this design from John Mercanti, the image of Liberty focuses on her fact as she looks out over the Atlantic toward the Old World with a stoic gaze. A beacon of hope and prosperity, the Statue of Liberty stands guard in New York Harbor to greet all who come to American shores in search of a new life. The inscriptions on this face of the coin read Liberty, In God We Trust, E Pluribus Unum, and the date mark of the coin.

The reverse face of Proof American Eagle Platinum Coins features a new design element with each date mark. The coins in the 1/4 oz weight feature designs that predominantly focus on the American bald eagle, with new images of the bald eagle used each year from 1997 to 2002. From 2006 to 2008, symbols representing the Executive Branch, Judicial Branch, and Legislative Branch of the American federal government were used on the coins. Inscriptions read United States of America, 1/4 oz. .9995 Platinum, W, and $25.

The highest minted Proof American Eagle 1/4 oz Platinum Coin was the debut release from 1997. With 18,628 coins sold, it had a mintage nearly 4,000 coins higher than the next closest option. The lowest minted was the final coin released in 2008 with its mintage of just 4,153 coins.

Proof American Eagle 1/4 oz Platinum Coins listed here come with the original US Mint display box and Certificate of Authenticity. Each coin is chosen for you once your payment clears. We cannot guarantee a particular date or design. If you buy several coins, please remember you could get matching dates and designs.

Please contact us with questions. Provident Metals customer service can assist you at 800-313-3315, online using our live chat, and via our email address.