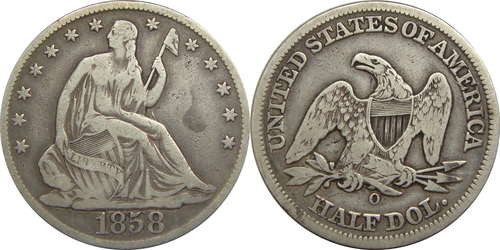 Though the process of minting coins has been around for centuries, the history of US coinage only dates back to the late 1700s. Before the colonies became the United States of America, there was no unique currency. People relied on trading foreign coins or bartering with goods. That changed in 1792, when the first coinage act was passed and established the foundation for the US Mint, which would oversee the production of all US coinage. These early coins were made of gold, silver, or copper.

The half disme was the first official coin of the United States. Legend tells that the first half disme coins were minted from Martha Washington’s silverware. Numerous other coins, with varying designs and denominations, were shortly added to the mint’s docket.

As US coins were introduced into circulation, there was a transitional period that lasted a few years before foreign coins were no longer recognized as legal tender. This was partially because the US was experiencing a shortage in gold and silver, which were used to strike coins. Spanish coins were widely used during this time. English speakers referred to these coins as the Spanish milled dollar due to the milling technique used on coin blanks to produce consistent weights and sizes.

The Californian Gold Rush in the mid-1800s produced enough gold to strike US coins and end the use of Spanish coins. Still, the Spanish coins became the direct ancestor for US coinage.

Out of the many coins that have been minted over the years, some are notable because they set a precedent or lasted longer than others. Let’s explore some notable historic American coins and the reasons they are remembered.

In 1933, Executive Order 6102 made it illegal to hoard monetary gold in America. This was due to the Great Depression, when hoarding gold only worked to stall economic growth. Gold was confiscated from the general public and the US Mint discontinued minting gold coins and silver dollars.

Federal Reserve notes, which were first issued in 1917, were originally backed by gold. That changed in 1933 when they could no longer be exchanged for gold coin. However, silver certificates were still exchangeable for silver coin up until 1964.

From 1933 on, no pure gold or silver coins were produced at the US Mint until the 1980s, when the mint started producing bullion and commemorative series that continue to the present day.

After Executive Order 6102, paper notes took place of all coin denominations above 50 cents. However, coins of smaller denominations were still mainstays for Americans. It became a tradition to place past presidents and Founding Fathers on American coinage, which began with the Lincoln cent in 1909. The tradition continued with the Washington quarter in 1932, the Jefferson nickel in 1938, the Roosevelt dime in 1946, and the Franklin half dollar in 1948.

More recent coinage has been partial to commemorative designs. The Washington quarter gave way to the state quarter program beginning in 1999. In 2004, nickels displayed a Lewis and Clark design to pay homage to the 200th anniversary. 2009 saw a redesigned penny in honor of Lincoln’s 200th birthday that included a shield design on the reverse to represent Lincoln’s preservation of the Union.

Even as technological advances continue to digitize our currency, circulated coins remain a staple in the US. There’s no doubt that our coins will continue to change over the years, but if history tells us anything, it’s that there will always be a place for coins.