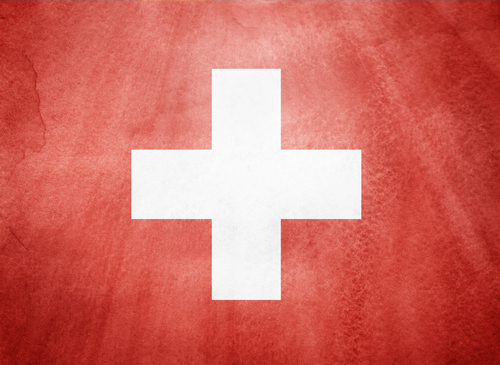 Switzerland’s national mint, also known as Swissmint, is located in the country’s capital city of Bern. It currently produces Switzerland’s legal currency - the Swiss Franc - as well as commemorative coins for customers around the globe.

While Switzerland has a long and remarkable past, the Swissmint’s history stretches back less than two centuries - making it one of the youngest mints in the world.

Before the Federal Coinage Act and the Monetary Reform of 1850, there had never been a single widely accepted unit of currency in Switzerland. There were more than 70 types of legal tender throughout the country, and every district or ruling body minted or printed their own currency. These coins and bills were inconsistent in value and denomination.

To add to the confusion, private Swiss banks also issued their own paper money. Tradesmen and mercenaries brought in a mix of outside coins and banknotes as well. For anyone attempting a monetary transaction in Switzerland, it was a tedious and complicated venture.

Steps to a Universal Monetary System

The first step to solving the complicated currency problem in Switzerland began in 1848 when the Federal Government gave itself all minting rights through the Swiss Federal Constitution. At that time, 80 percent of Swiss money consisted of outside cash and coins, especially French and Italian silver. For this reason, Italian, French, and Belgian currency was considered legal tender in Switzerland until 1865.

In 1849, the Swiss Parliament adopted the French “franc” as their national system of currency since it had been accepted as a uniform silver standard in 1795. The franc replaced older currency such as “batzen” and “gulden”, but the French franc would not rule in Switzerland for long.

Swiss, French, and Belgian leaders signed an agreement to create the “Latin Monetary Union” in 1865. Greece would become part of the LMU in 1866.

According to the Swiss Mint, this cooperative treaty “stipulated that these governments were permitted to issue a fixed value of money per capita of population.”

Both gold and silver coins issued by the LMU and minted in the partner countries were allowed to circulate freely among themselves as the members of the LMU believed it was the beginning of a “universal monetary system.”

Up until 1890, an old mint in the Canton of Bern was occupied by the government on a trial basis; however, Gerberngraben became the Federal Mint at that time. The Federal Mint is also known as the Swissmint or simply the “Mint.” It has operated independently from the Federal Finance Administration since 1998, though it is still owned by the Swiss Federal Department of Finance.

In the late 1800s, Gerberngraben began to struggle to produce enough coins to meet demand. As a result, a new building was commissioned in the early 1900s in the Kirchenfeld District of Bern. Designed by architect Theodor Gohl, it was completed in 1906 and included such features as a marble, sandstone and yellow-orange brick Neo-Renaissance facade. A pair of huge coins were carved into the marble on either side of the entrance doors.

Switzerland officially adopted the Swiss franc (CHF) as its national currency in 1926. Today, the country (and its neighbor Liechtenstein) regard the Swiss franc as their exclusive legal tender. The Swiss do not use the Euro, though it may be accepted in some places like gas stations and hotels.

Gold coins issued by the members of the LMU circulated in Switzerland until 1936. At that time it cost more to produce pure gold coins than their face value. In 1936, the Great Depression caused the Swiss franc to fall so far in value that it nearly lost its “legal tender” status.

Like the gold coins, lower valued silver coins were pulled from circulation in 1967 because minting them exceeded their face values of 2, 1 and 1/2 francs. It was then believed that many of these silver coins were sold abroad and melted down for silver bullion. As a result, exporting silver coins from Switzerland was prohibited starting in 1968.

In an attempt to save money, the Federal Council of Switzerland also decreed that all 5, 2, 1, and 1/2 franc coins were to be made of “cupronickel” - a copper-nickel alloy.

History of the Helvetia Gold Coin 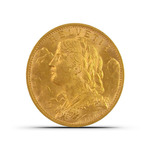 The most sought-after Swiss coin to modern coin collectors is the Vreneli, or as it is more commonly known, the “Helvetia”. Only available in gold, this 20 franc Swiss coin is emblazoned with the head-and-shoulders profile of a young woman often referred to as the “Swiss Miss.” She wears her long hair in a braid over her head and a garland of flowers rest lightly on her shoulders. This young woman is Helvetia, the Swiss version of Lady Liberty in America. Her name is a shortened variant of the Latin name for Switzerland: Confoederatio Helvetica.

The reverse of the Helvetia coin includes the Swiss shield and cross, as well as an oak wreath, the coin’s denomination and the striking year. A border of tiny stars decorates both sides. These 90 percent pure gold coins sell today for between 248 and 258 CHF ($250-260 USD and 233-242 Euro.)

The original Helvetia coins were authorized in January 1896 to be issued in 1897. They were struck each year after until 1936, when their legal tender status ceased. Restrikes were issued in 1947 and 1949.

Today, the Swiss Mint’s official responsibility is to strike coins for general circulation. New coin sets, proofs and commemorative coins can also be purchased. If you are interested in investing in Swiss bullion, Provident Metals has options for you including the Helvetia.