In an effort to help expand the value of your precious metal bullion portfolio, Provident Metals offers an assortment of sovereign minted coin series. Bullion products provide you with a tangible asset that can assist you in planning your financial future. On top of the value of owning precious metals, buying an entire series adds collectibility value as well.

Provident offers a variety of sovereign minted bullion coins from the most recognized national mints. We invite you to browse our selection, listed below. You might just find the next bullion series that strikes your interest! 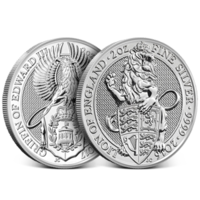 From the British Royal Mint, the Queen’s Beasts series features two ounce silver coins made of .9999 fine silver. Each of the ten coins that will eventually be released features one of the beasts that stood guard over the coronation of Queen Elizabeth II in 1953, representing ancient royal lineages. The heraldic statues have now been reimagined as silver bullion coins. The obverse of these coins contains a portrait of Her Majesty. This ongoing series includes: 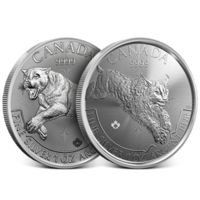 Produced by the Royal Canadian Mint, the Predator series features the iconic mammalian predators of the region. Each one ounce coin contains .9999 fine silver. The obverse features a portrait of Queen Elizabeth II, while the reverse of each of the four coins in this series features a different predator. Each coin in this series features innovative security features, including a laser engraved privy mark and micro-inscribed radial lines. This series will consist of four designs released over two years, which will include: 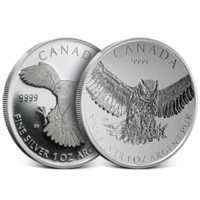 First launched in 2014, the Birds of Prey series consists of four designs and was produced by the Royal Canadian Mint. Each coin is made of one ounce of .9999 silver and carries a legal tender value of five dollars. The obverse of each coin features a portrait of Queen Elizabeth II, while the reverse features a different bird of prey. This series includes: 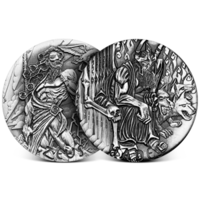 The three-coin Gods of Olympus series from the Perth Mint celebrates the lore of Greek mythology. Each coin is made of two ounces of .999 fine silver, struck in high relief to bring out intricate details. These coins are rimless, and have an antiqued finish. You will find Queen Elizabeth II and the coin’s denomination on the obverse, while one of three Greek gods sits on the reverse. The name of each god is inscribed below his image. Additionally, each coin ships in a custom wooden case with a certificate of authenticity. The featured gods include:

Produced by the Royal Canadian Mint, the Canadian Wildlife coin series celebrates the nation’s bountiful mammals. This six-coin series launched in 2010 and includes coins made of one ounce of .9999 fine silver. The shared obverse has a portrait of Queen Elizabeth II, and each coin’s reverse features a different animal found in the region. 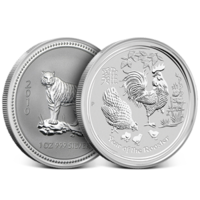 The Lunar series from Perth Mint celebrates the Chinese Lunar Zodiac, which rings in each new year with a rotation of totem animals. Children born in that year are said to take on some of the qualities that each animal is thought to possess. Each of these coins is made of .9999 fine silver, and each year’s release comes in multiple weights to meet your investing needs. The obverse features Queen Elizabeth II, and the reverse features the totem animal of each year’s release. The series includes: 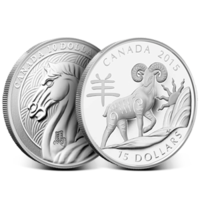 Another Lunar coin series based on the Chinese Zodiac is currently being produced by the Royal Canadian Mint. These coins are made of one ounce of .9999 fine silver, and each one carries a legal tender value of $15. Coins will be released annually from 2010 to 2021, corresponding to the animal of the year in the twelve-year cycle. The obverse features a portrait of Queen Elizabeth II, and the reverse features the Zodiac’s animal. Additionally, the mint has also released special edition Canadian Silver Maples, each with a privy mark shaped like the year’s totem animal. Coins, along with their mottos, in this ongoing series include: 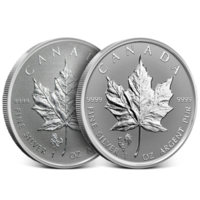 Provident Metals is committed to offering the most beautiful and most secure sovereign coin series. Visit it our Coin Series category page and Blog for new coin series releases and updates.