Bullion Investment
Collectible Coins
Silver vs. Platinum vs. Palladium: How to Spot the Difference

Can you spot which Canadian Maple coin is made of silver, platinum, or palladium?

The gold-silver dynamic is a key part of understanding precious metals and old coins. But the coin business had expanded considerably from these two early substances. Companies and governments are now producing coins from a growing library of materials that are also considered valuable.

To the naked eye, two of these “novel” substances—platinum and palladium—look almost the same as the older standby silver. However, knowing the difference between a silver, platinum, and palladium coin may mean a difference of hundreds or even thousands of dollars in price.

Can you spot the differences between these 2018 Canadian Maple coins—each made from a different metal? 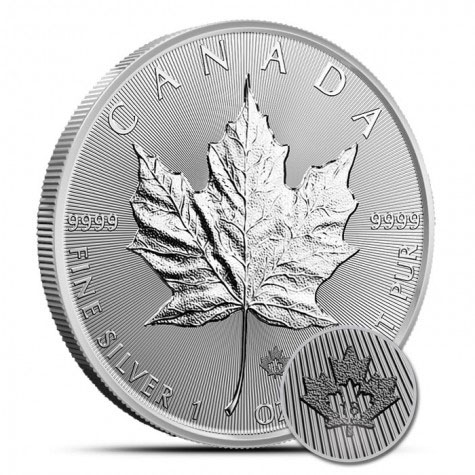 Continue reading to learn some tricks for identifying the difference between silver, platinum, and palladium.

Silver is the most common between these three types of precious metals. This metal has been made to produce coins for thousands of years. Silver coins made up the majority of coins that were produced by the United States government, and other governments around the world, up until the ‘60s and ‘70s.

Silver is a softer metal that has a tendency to tarnish over time. Its soft nature means that the features of a silver coin are subject to wear and tear. Silver coins in uncirculated condition, though, may be as bright and brilliant as any other coin.

Try shining a light on a silver coin and watch how it shimmers. This may help distinguish its luster from other brighter coin materials. Silver also weighs less and isn’t as dense as platinum, so a quick determination of its weight could help narrow the decision-making process.

Platinum tends to be more expensive than silver per ounce. Throughout history, these coins have been some of the rarest. They were only mass-produced for certain years in a few different countries. The vast majority of the platinum coins found today date back only forty years or so.

Platinum is an incredibly dense metal that is resistant to tarnish and scratching. As a result, platinum coins and jewelry are almost always bright and brilliant. They have an exceptional luster that can withstand wear and tear better than other metals. These coins almost always have intricate designs and patterns that are struck at high relief. Platinum coins will keep their high relief and all of their details longer than other coins. If a coin was produced beyond four or five decades ago and does not have its relief and close details, it’s most likely not a platinum coin.

In addition, coins made out of platinum are particularly heavy. An individual can perform a water displacement test or simply hold the coin in their hand in order to determine the weight of the coin.

Palladium is a unique and interesting material as a coin base. It has only been used as an investment metal for coinage in the last century. As a result, a quick glance at a date can help discount the presence of palladium in many cases. If the coin was produced within the last century, weight is the next clearest way of distinguishing between platinum and palladium. Palladium is about half the weight of platinum.

Distinguishing Between the Metals

There are few recommended ways to ensure that a coin is definitely silver, platinum, or palladium. Hallmarks on these coins can be easily faked or misrepresented by a counterfeiter. But you can still take a few steps to help make the decision-making process easier and narrow down potential options.

The first step to telling what material a coin is made out of is to look at the date and type of the coin. Almost all older coins that have a white-gray appearance contain at least some silver. Identifying the general type of coin and the year it was minted can help narrow the decision-making process considerably.

Next, look for any signs of tarnish. Tarnishing is slightly different from simple wear and tear or other imperfections. All sorts of coins can have imperfections. For tarnish specifically, make sure to clean the coin first and remove any surface impurities like dust. If the cleaned coin still has a dark or dull color, the coin is likely nit platinum or palladium.

For untarnished coins, analyze the surface for scratches and “patina” (the oxidized metal that coats many old bronze and copper coins). Platinum is resistant to the decay of patina and is hard enough to withstand scratches from almost any other metal or material. Finally, you can calculate weight and density to tell the difference between the three metals. A platinum coin will be the most dense and heaviest.

Telling apart silver, platinum, and palladium in a coin can be a difficult endeavor. They are all brilliant and beautiful metals that have similar characteristics. Without tarnish or an old date, it may be difficult to tell the precious metals apart. However, it’s a great skill to be able to distinguish between these three very different metals.