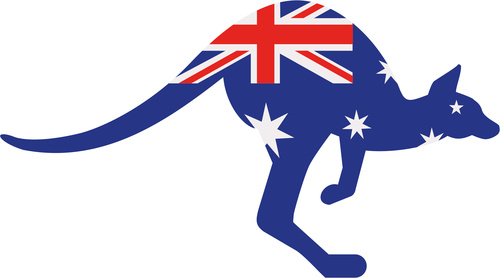 The Perth Mint in Australia is one of the oldest working mints still standing on its original location, and its influence on Australia’s precious metals industry is unprecedented.

Read further to learn more about Australia’s precious metal history and how the Perth Mint has contributed to its rich legacy.

America was not the only country to see its share of gold rushes in the 19th century. In the late 1800’s, large gold deposits were discovered in the Coolgardie and Kalgoordie areas of Western Australia. Australia’s population in that area was also growing rapidly, and it was soon realized that the area would need its own mint branch, and the city of Perth provided the perfect location.

The Australian Perth Mint was opened in 1899 by Sir John Forrest and was the third branch of the British Royal Mint opened in Australia. Gold finders would bring their raw gold to the mint in order to have it refined into coins to use as currency. From the Mint’s opening, through 1931, the Australian Perth Mint had struck over 106 million gold sovereigns and roughly 735,000 half-sovereigns that could be used as currency.

Britain abandoned the gold standard in 1931, and while that caused the sovereign production to halt, the Mint continued to produce gold bars. Once World War II began, however, the Perth Mint was needed to supply Australia with its coinage, although they minted mostly from base metals during that time.

The Perth Mint received a telegraph from the Commonwealth Treasury in Canberra at the time stating: “Heavy demand for Australia coin and Melbourne Mint working full capacity. Could you undertake minting copper coin?” From there until the 1980’s, the Perth Mint was responsible for minting Australia’s lower-denomination coins.

The Australian Perth Mint made a great leap in terms of gold purity. The mint produced a 999.999 13 Troy ounce proof plate. The Royal Mint was very impressed with this feat, and requested some refined gold to model its standards upon.

While Australia had been its own federation since 1901, the Perth Mint was still under British Jurisdiction until 1970. It was then that ownership of the Mint came into the hands of the Western Australian government. At the time gold prices were on the rise meaning that the Mint took on a new significance going into the 1980’s.

In 1987, a new direction was decided upon for the future of the Perth Mint. In an agreement with the Commonwealth of Australia’s Department of the Treasury, the Perth Mint was permitted to mint and market Australian legal tender out of precious metals aimed at investors and collectors from around the world. With that, Australia’s Prime Minister released the Nugget Gold Coin series that same year. This series has proven a popular collector’s item and are sometimes referred to as “gold kangaroos”.

Up until the year 2000, the Perth Mint’s gold output totaled around 3.25% of the total weight of produced gold in the world, and the Mint decided to open a new, state-of-the-art manufacturing facility next door to further gold advancements in 2003.

The Perth Mint accomplished just that in 2011 when they created the world’s heaviest and most valuable gold coin on record. It has a face value of $1 million and is comprised of 1,012 kilograms of 99.99 pure gold.

The Australian Perth Mint has certainly seen its fair share of popular series, and those series are still being continued today. In addition to the Nugget Gold Coin series, popular Perth Mint series include: 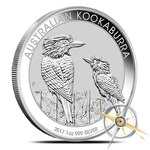 First introduced in 1990, the Australian Kookaburra series is one of the Perth Mint’s most famous. Each coin contains 10 ounces of .999 silver, and a new coin is released annually with a new image of the kookaburra on the obverse. 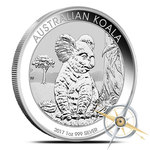 The Mint’s Silver Koala coins are also a popular ongoing series from the Australian Perth Mint. Each koala coin is made up of .999 fine silver. A new obverse koala image is released with each year’s new koala coin. 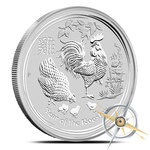 The Lunar Series I and II are designed to commemorate each year with a design based on the Chinese zodiac symbol for that year. The series has been running since 1999, and begins again every twelve years. Newly released coins are a part of the Lunar Series II. The Lunar series coins are available in a variety of weights and silver ounces.

Today, the Perth Mint continues to produce beautiful collectible coins out of numerous precious metals and advance the craft and artistry of coin making. If you would like to make one of the Perth Mint coins your next investment, Provident Metals offers a wide selection to choose from including numerous series and collection pieces.