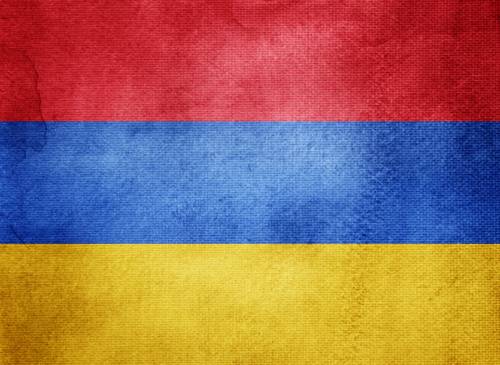 From ancient times to the modern day, the Armenians have driven toward advancement and excellence

While the evidence may be elusive, the 5th century father of Armenia, Moses of Khoren, traces the origins of his modest nation back to 2350 BCE and the warrior-chieftain, Haig (or “Haik”). Having defeated a would-be despot in the region of Mount Ararat, Haig and his small band of followers settled between the Black Sea and Mesopotamia - the land that later became Armenia.

Notable ancient Greeks like Xenophon and Herodotus wrote later about the wealth of this people and the fertility of their land. Except for the occupation of Alexander the Great’s armies in 330 BCE, kings ruled Armenia up until Pompey led Roman soldiers into the land in 66 BCE.

Though strong and proud, Armenia has always been among the more diminutive nations in the region. Because of this, the country has often had to submit to the great powers of the world at various points of history.

The irony, however, is the relentless advancement of civilization led by Armenians throughout their difficult history. The first to proclaim Christianity as the national religion, Armenians have made significant contributions to the arts, sciences, commerce and politics.

One unsung bestowal is their contribution to monetary system and coinage.

Tigranes II is remembered as the Armenian “King of the Kings”. Ascending the throne in 94 BCE, Tigranes the Great reigned for 40 years and conquered several adjacent lands and peoples. It is considered, by some, to be the last golden age of Armenia. The king’s cultural aim was to infuse his people with Greek Hellenistic culture. One such manifestation of this was the adoption of the Armenian “drachm” - a predominantly silver coin much like the Greek drachma.

The drachm, or “dram”, issued in Tigranes’s day came in gold or silver and bore the king’s likeness, with a star and eagle-studded tiara design on the obverse. The reverse shows Tyche of Antioch, a goddess of fortune, seated at the king’s feet. The “tetradrachm” was also used during this era. Equal to four drachmae in value, this Armenian coin was identical to the dram but almost four times the weight at 16.01 grams.

Tigranes the Great was succeeded on the throne by his son, Artavasdes II, who cooperated with Roman occupiers. His likeness replaced his father’s on the obverse side of Armenian coinage. The reverse side reveals a quadriga, or chariot drawn by four horses. Artavasdes II was also depicted on the Armenian tetrachalkous—the bronze chalkous being the smallest and least valuable among coins in the Greek world.

Succeeding Artavasdes was his son—and another Armenian king submissive to Roman rule—Tigranes III, who “ruled” from 20 to 8 BCE. Artifacts of his coins have the king’s bust with tiara on the obverse while Nike, the Greek goddess of victory, ironically graces the reverse.

As the Roman Empire grew in dominance over Armenia, its coinage reflected this political reality. Silver denarii minted near the turn of the millennia (between 27 BCE and 14 CE) depicts the emperor Augustus on the obverse and an Armenian archer on the reverse.

By the middle of the first millennium CE, the Roman Empire had fallen and Armenia was alternately dominated by or at war with the Persians and the Arabs. When the Persian Empire collapsed and the Byzantines waged war on the Arabs, Armenians were able rebuild their civilization ruled by its own Bagratid Dynasty.

The first coins minted during this time are also the first ever with the Armenian language engraved upon the reverse. The obverse displays an image of Jesus Christ. As this was a century of cultural renaissance for Armenia, this public example of its unique alphabet is telling. Unfortunately, few Bagratid coins have survived.

In 1064, the Seljuk Turks invaded the Armenian capital of Ani, slaughtering many and driving others into the region of Cilicia, an Armenian province taken by Tigranes the Great and later annexed by the Byzantine Empire. Over time, Byzantine rule declined and Cilicia underwent a series of rebellions and upheavals.

Rising from the ashes was an Armenian prince named Roupen (or Ruben) who consolidated his power over the Cilician Armenians. Ruben’s drams featured crosses on both sides. Later, Cilician kings minted coins with their own visages, or lions.

By 1375, Muslim Malmuks had overrun Cilicia, and a slow migration of Turks had begun. By the 16th century, Ottoman Turks held sway over the Cilician Armenians, although many of them had fled to Cyprus in the intervening years. After this time, there was little Armenian coinage to speak of until the modern era. 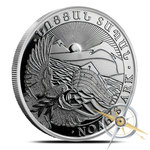 Due to the oppression by the post-Ottoman government led by a party known as the “Young Turks”, Armenians petitioned the Russians for protection, and eventually joined the Soviet Union in 1920. No distinct Armenian currency would be produced again until the fall of the USSR in 1991. The newly independent Republic of Armenia began printing paper currency and coining drams. Presently, the 10-dram is the smallest denomination in Armenia.

Among the most distinctive Armenian bullion coins in circulation today is the Noah’s Ark silver coin. Since Mount Ararat—the location at which Noah’s Ark of the biblical narrative ran aground after the Great Flood of the Old Testament—was originally within Armenian borders, the Armenian central bank issued this investment coin in 2011. Its silver composition reaches a fineness of 0.999. With the Armenian coat of arms on the obverse, the reverse side portrays Mount Ararat, the Ark and the dove that returned to Noah with evidence of dry land.

The Noah’s Ark silver coin comes in varying weights and dimensions. The one ounce version has a face value of 500 drams but the true value can, of course, grow to much more due its high precious metal content. This investment coin is a continuation of Armenian coinage that reaches back across centuries.

If you would like to make an Armenian coin your next investment, including the Noah’s Ark coin, Provident Metals can help. Browse our entire collection of foreign coins for sale, or check out our Knowledge Center.