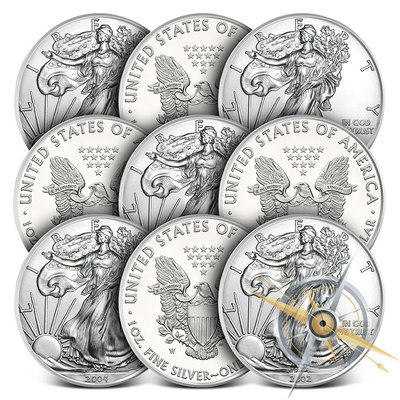 Silver sovereign coins are among the most popular bought and sold bullion coins in the world, and they have proven to be a great investment.

Sovereign silver coins are popular with investors for good reason. Unlike bars or rounds, the purity and precious metal content of sovereign coins are guaranteed by the nation that minted them. They are easily identified and can be easily verified, making their resale much simpler.

In the buy low, sell high world of investment, silver can have strategic advantages to other precious metals.

Many nations produce sovereign coins, and deciding which ones to buy may seem a bit arbitrary since many of them contain strictly defined amounts of silver. There are, however, sensible reasons to buy silver bullion coins from particular countries.

In addition, these five coins all have noteworthy designs which increases their value for coin collectors. Although countries offer silver bullion coins in a few different weights and sizes, this list focuses on the popular 1 troy ounce coins.

The obverse of the American Silver Eagle coin features the much-admired walking Lady Liberty designed by Adolph Weinman. Lady Liberty strides purposefully toward the sun with olive branches in her arm and the American flag draped over her shoulder.

The reverse features a modified version of the Great Seal of the United States. The majestic eagle carries the familiar arrows and olive branch in its talons with a shield at its chest. These sovereign coins contain 1 troy ounce of 99.9% pure silver and have a face value of $1.

Produced since 1986, American Silver Eagles are arguably one of the most known silver bullion coins on the planet. They are trusted by domestic and foreign investors alike. The market for Eagles is so strong that they are practically a liquid asset. Eagles are exempt from the Internal Revenue Service’s 1099 reporting, making them an extremely private investment. They are also very affordable. Investors are free to buy them in small or large quantities.

The obverse of the Canadian Silver Maple coin displays a portrait of Queen Elizabeth II; her profile has been revised three times. The reverse of the coin shows the famous Canadian maple leaf. Radial lines and a micro-engraved privy mark were added in 2014 as an additional security feature. They contain 1 troy ounce of 99.99% pure silver and have a face value of $5.

Available for purchase directly from the Canadian Mint since 1988, Canadian Silver Maples are a favorite of both investors and collectors. Collectors are attracted to the several special editions released in relatively small quantities. This is especially true of the Titanic Silver Maple Leaf, of which only 26,000 were minted.

The obverse of Chinese Silver Panda coin shows the Chinese Temple of Heaven. The coin’s design has been slightly altered a few times over the years, but it remains mostly the same. The reverse displays a panda bear, with a different design each year. The pandas have been depicted in multiple poses including sitting, eating and playing.

The Chinese Silver Panda is also highly sought after by investors and collectors. The market for Pandas has always been strong, but it increased greatly in 2011 when it became legal for Chinese citizens to own silver coins.

In addition to unique mint variations, the silver Panda’s constantly changing and gorgeous designs make them popular with collectors. Investors are attracted to the higher than expected appreciation that this variety has stimulated.

The obverse side of the Austrian Silver Philharmonic coin depicts the famous pipe organ used by the Vienna Philharmonic. The reverse shows an array of orchestral instruments - including a harp, four violins, a cello, a bassoon and a Vienna horn. The design on both sides has remained the same from their original minting in 2008 to the present. The coins contain 1 troy ounce of 99.9% pure silver. The face value is 1.5 euros.

The Austrian Silver Philharmonic is the most widely distributed of the silver bullion coins minted within Europe, and it is the only silver coin denominated in euros. The Austrian Mint is the oldest continuously operating mint in the world. Its reputation for technical precision lends immediate and measurable value to the coins it produces. The Silver Philharmonic is extensively collected in Europe, North America and Japan, making purchase and resale quite easy.

Like the Canadian Silver Maple, the obverse of the British Silver Britannia coin shows a picture of Queen Elizabeth II. Several different versions have been employed but the design has been fairly consistent over the years. The reverse side features Britannia, the female, warrior-like personification of Britain.

If you are interested in making one of these silver sovereign bullion coins your next investment, Provident Metals can help. Check out our extensive silver coin collection, or head to our Bullion Investment Guide for more information.