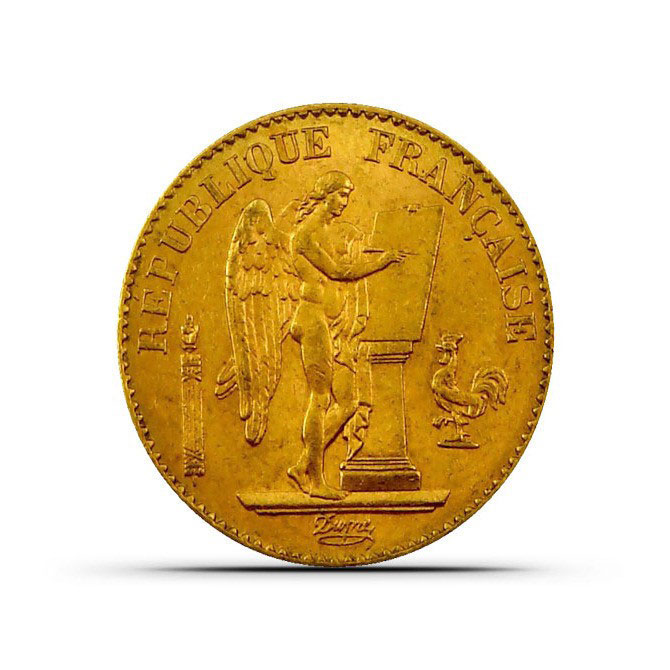 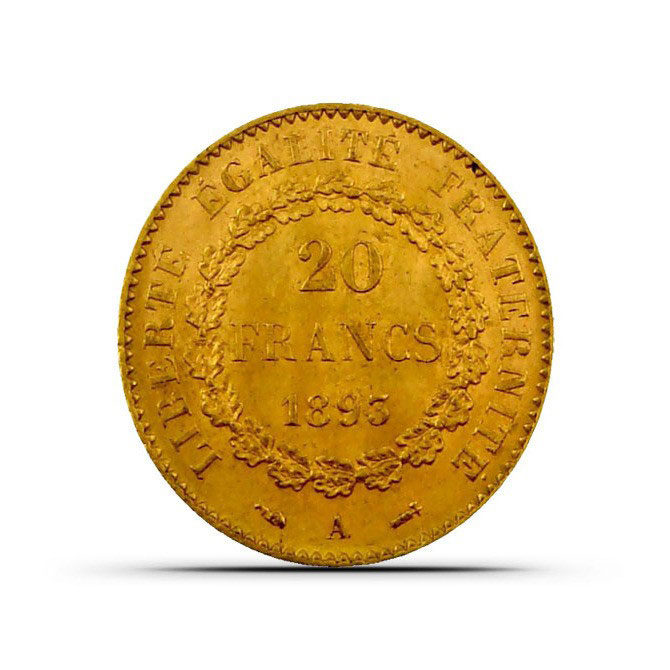 BUY BACK PRICE: $346.67
Add to WishlistLog In to add this product to your Wishlist

Hailed as one of the luckiest coins on earth, the 20 Franc Gold Angel containing .1867 troy ounces of 90 percent pure gold can be yours today at Provident Metals. Each coin arrives in extra fine condition or better, and has a diameter of 21 mm.

The obverse of each Gold Angel is a recreation of Augustin Dupr’s original design, which first appeared on the 1 Louis D’Or gold coin in 1792.

Dupr was France’s fourteenth Engraver General of Currency, holding his post during the French Revolution. According to legend, Dupr narrowly escaped the guillotine, thanks to the Gold Angel he carried in his pocket (and used to bribe a guard).

Beginning with that pivotal moment in history, the French coin came to be known as the Lucky Gold Angel — a talisman even carried by Napoleon Bonaparte, until he lost it the evening before his devastating defeat at the Battle of Waterloo.

Brief History of the Gold Angel

First introduced in 1360 to pay a ransom for King John II, the franc was re-established as an official form of decimalized-currency by the French Revolutionary Convention of 1795.

During Napoleon’s rule as First Consul Regime in 1803, the 20 Franc Gold Coin was put into production, and by the end of Napoleon’s reign in 1815, the coin came to be known as the napolon.

Gold coinage was completely suspended during the First World War, and after WWII, 20 and 50 Francs were produced using an aluminum-bronze alloy. The Euro was officially adopted in 1999, and by 2002, the 20 Franc was no longer circulating.

About the Paris Mint

The Paris Mint was established in 864, making it the oldest institution in the entire French Republic. Today’s mint was erected during the reign of Louis XV (1715-1774), designed by Jacques-Denis Antoine at the former Htel de Conti. The hotel was originally owned by the royal Conti family during the late 17th century.

The mint runs a secondary facility — its monetary establishment in Pessac — where the nation’s circulation coinage is currently produced.

You’re in luck! Purchase 20 Franc Lucky Gold Angels from Provident Metals today. Each coin will arrive in extra fine condition or better, and dates are of our choice. Use our secure online ordering system and your gold coins will arrive in just days.

10 Review(s)
Please or to write a review.

"This 20 Franc Gold Angel is my first gold coin and it is extraordinary. I bought the air-tite for this coin, I plan to keep this for a long time. Thank you, Provident."
Don from - May 15, 2015

"This 20 franc gold angel arrived in perfect condition, excellent buy and a great job by provident on the shipping."
Vincent from - January 24, 2014

"Provident has provided an easy online way of purchasing gold from different countries. The security and quick shipment is a joy. Coin is as described. Love this company and website"
Nam from - April 01, 2013

"This coin is very beautiful. the design is awesome and very majestic. I would really recommend this coin, it says XF but It came to be around MS. Very nice. "
Michael from - December 20, 2010

"coin arrived promptly, was in excellent shape with only the slightest use from handling. Previous owners obviously took very good care of this coin. This one is going in a bezel for a necklace gift. MY GIRL LIKES ANGELS................"