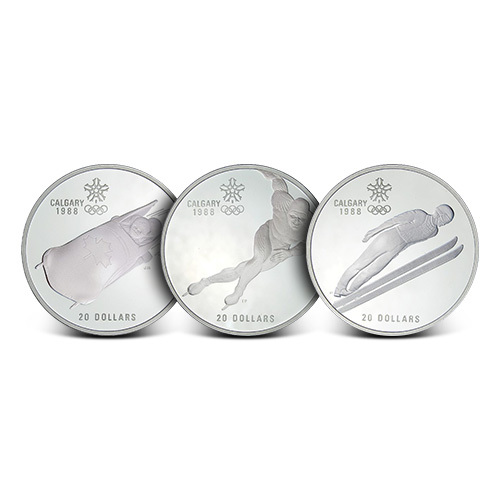 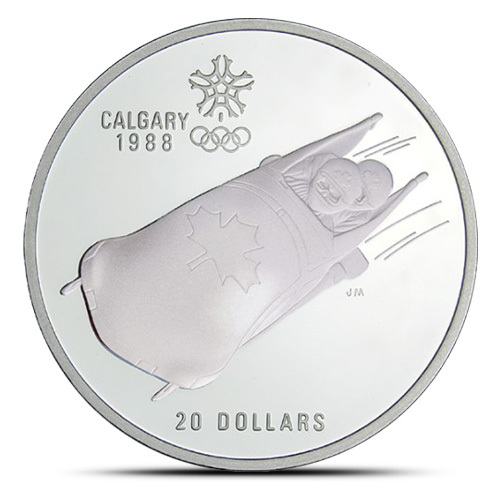 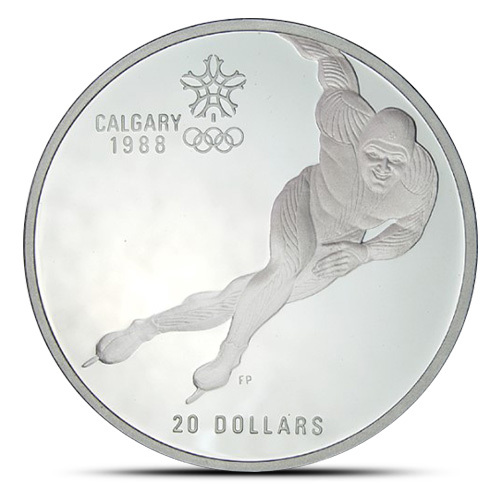 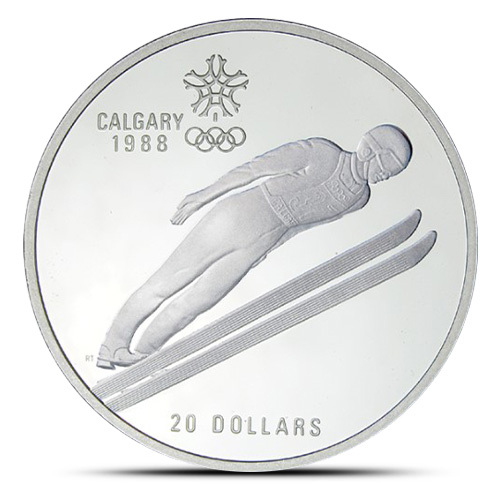 Out of Stock
Sorry! We're sold out right now.
NOTIFY ME
BUY BACK PRICE: $23.59
Add to WishlistLog In to add this product to your Wishlist

The commemorative $20 silver coins issued by the Royal Canadian Mint from 1985 to 1987 in partnership with the Royal Bank of Canada were designed to celebrate the 1988 Winter Olympics in Calgary. The series was the second of its kind following a series in the 1970s honoring the 1976 Summer Olympics in Montreal. The coins honoring the Calgary games were, however, different in many ways. Today, you have the opportunity to purchase Canadian $20 Olympic Silver Coins online at Provident Metals.

The release of the 1988 Winter Olympics commemorative silver coins marked the first use of the $20 denomination in this type of series. The previous collection honoring the 1976 Summer Olympics in Montreal featured a denomination of $10. Additionally, while the 1976 Olympics coins were available in BU and Proof, the 1988 Olympics coins were produced only as proof specimens. Another unique facet of the 1988 Winter Olympics coins was the use of edge lettering for the first time on a silver Canadian coin. The phrase XV Olympic Winter Games Jeux DOlympiques DHiver was inscribed on the coins, though some specimens were released that had the inscription missing.

On the obverse of Canadian $20 Olympic Silver Coins, the Royal Canadian Mint features the second-generation right-profile portrait of Queen Elizabeth II. Her Majestys effigy is accompanied by inscriptions of Canada, Elizabeth II, a date mark of 1985, 1986, or 1987, and a maple leaf.

The reverse of the Canadian $20 Olympic Silver Coins features one of 10 different designs of Olympic athletes. These designs represent the major sports at the Winter Olympics and included designs for downhill skiing, speed skating, hockey, biathlon, cross-country skiing, free-style skiing, figure skating, curling, ski-jumping, and bobsled. Additional elements on each coin include inscriptions of 20 Dollars and Calgary 1988, with the symbol for the 1988 Winter Games and the Olympic rings.

These Canadian $20 Olympic Silver Coins come with 1 Troy oz of sterling silver, or .925, content. The coins are housed in flips for shipping and come with various possible designs. We do not guarantee a design in advance. Your coins will be picked after your payment clears. Please note you may receive coins with the same designs if you order multiple.

Please feel free to reach out to Provident Metals. Our team is available on the phone at 800-313-3315, online using our live chat, and via our email address.