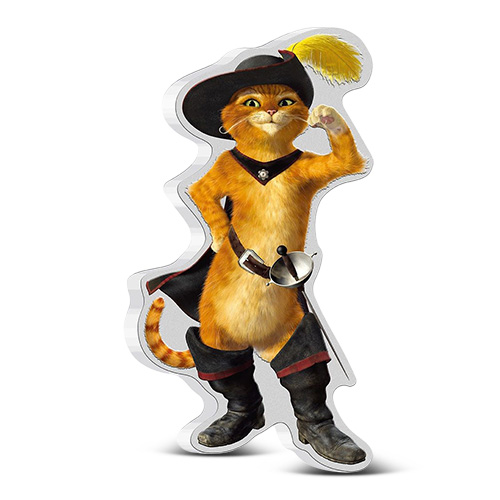 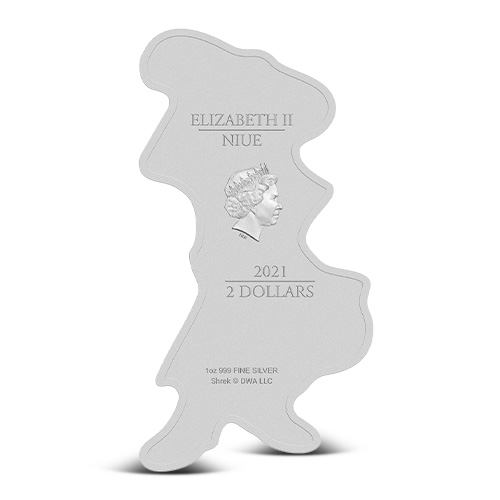 The DreamWorks Animation universe created around the grumpy ogre known as Shrek includes a lot of famous, if not generic, fairy tale characters. From the Gingerbread man and a talking donkey to the infamous Puss in Boots, countless characters feature in the Shrek franchise. For the third release of the DreamWorks Shrek Series of silver coins, Puss in Boots takes a bow. Today, you have the opportunity to get 2021 Niue DreamWorks Puss in Boots Shaped 1 oz Silver Coins online at Provident Metals.

Puss in Boots is voiced by actor Antonio Banderas in the DreamWorks Animation feature films. His first appearance in the Shrek franchise came in 2004 in the Shrek 2 feature film, with a later release of a Puss in Boots spin-off film in 2011. A further spinoff came to Netflix in 2015 in the form of a TV series entitled The Adventures of Puss in Boots.

On the obverse side of the 2021 Niue DreamWorks Puss in Boots Shaped 1 oz Silver Coin, you will find a portrait of Queen Elizabeth II. Created in 1998 by Ian Rank-Broadley, this effigy has featured on circulation and bullion coinage for nations such as Britain, Australia, New Zealand, Niue, Tuvalu, Fiji, Tokelau, and the Cook Islands. It is still in use for nations like Niue and depicts the Queen wearing the Girls of Great Britain and Ireland Tiara. This field of the coin includes inscriptions of ELIZABETH II, NIUE, 2021, 2 DOLLARS, and 1 OZ 999 FINE SILVER.

The reverse face of 2021 Niue DreamWorks Puss in Boots Shaped Silver Coins comes with an image of the title character. Here, Puss is shown standing in a confident pose with his sword at this side, a hat on his head, and black boots on his feet. His body has the colorization of an orange cat with black leather and red trim for the clothing.

While Shrek was, himself, a generic ogre that could have appeared in any number of fairy tales over the course of time, Puss in Boots has a more specific origin. The story of Puss in Boots actually dates to Italy in the 1550s when the first fairy tale about a cat using trickery and cunning to gain wealth, power, and the hand a princess in marriage was written. The story has been told and retold countless times in the centuries since.

2021 Niue DreamWorks Puss in Boots Shaped 1 oz Silver Coins are available to you with themed presentation boxes. Each coin comes with a Certificate of Authenticity from the mint.

Please contact Provident Metals if you have any questions. Our team is available to assist you at 800-313-3315, online using our live chat, and via our email address.