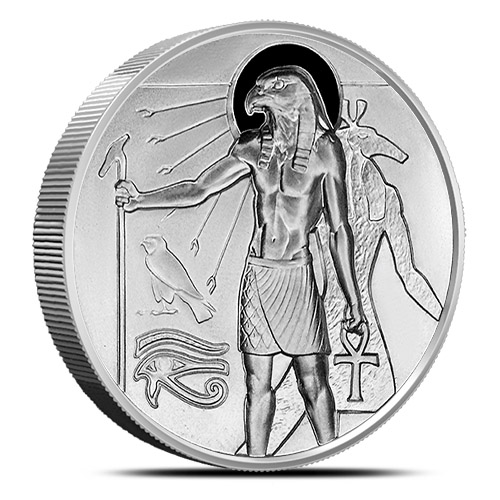 Out of Stock
Sorry! We're sold out right now.
NOTIFY ME
BUY BACK PRICE: $48.08
Add to WishlistLog In to add this product to your Wishlist

As the Egyptian Gods Series continues, the figures featured in this stunning collection continue to increase in importance. Among the most famous deities from Egyptian mythology is the god known as Horus. Though you may not be familiar with the duties and roles Horus fulfills, you have no doubt seen the symbols that have represented him over the last several millennia, from a man with a falcon head to the haunting Eye of Horus. Today, you have the chance to get 2 oz Silver Egyptian Gods Horus Rounds with an Ultra High Relief strike online at Provident Metals.

The evolution of Horus name within Egyptian mythology points both to the symbolism associated with him in hieroglyphs and translations across various languages. The modern name he is known by, Horus, comes predominantly from Ancient Greek translations of Egyptian symbols with the name eventually being written as Horos in Greek. Other translations of his name coming from Late Egyptian texts include Siese and Harsiese, which translate respectively as son of Isis and Horus, son of Isis.

On the obverse side of 2 oz Silver Egyptian Gods Horus Rounds, you will find the figure of Horus as depicted in his human form. Here, he has the body of a man with the head of a falcon. Most scholars believe this falcon head to be that of a lanner falcon or a peregrine falcon. He extends his right hand to clutch a staff as two of the most common symbols referencing him are featured in the lower-left field. The falcon shown here was a common reference to Horus in Egyptian hieroglyphs, while the Eye of Horus shown here represents well-being, healing, and protection. The figure in the background field is Set, an opposing god to Horus who once damaged one of Horus’ eyes.

The reverse face of the 2 oz Silver Egyptian Gods Horus Ultra High Relief Round features a right-profile depiction of a falcon wearing the pschent. The pschent is an ancient Egyptian double crown reflective of the pharaohs ruling over the combined kingdoms of Upper Egypt and Lower Egypt. The background offers a pyramid, while the falcon stands above a cobra. The inscriptions at the base of the design field include 2 OZ, 999, and AG.

These 2 oz Silver Egyptian Gods Horus Rounds are ultra-high-relief specimens with impressive 3D visuals and beautiful visual depth to the field. Each one is available individually in a plastic flip, while multiples of 10 come in plastic tubes.

Please contact Provident Metals if you have any questions. You can call us at 800-313-3315, chat with us live online, or email us directly.