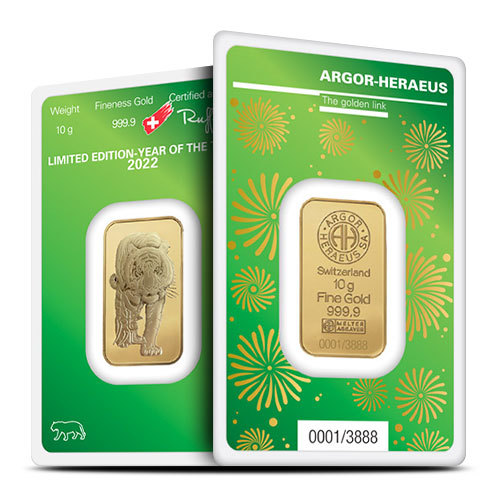 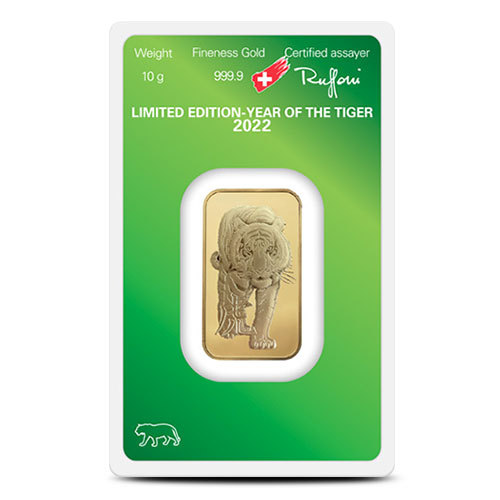 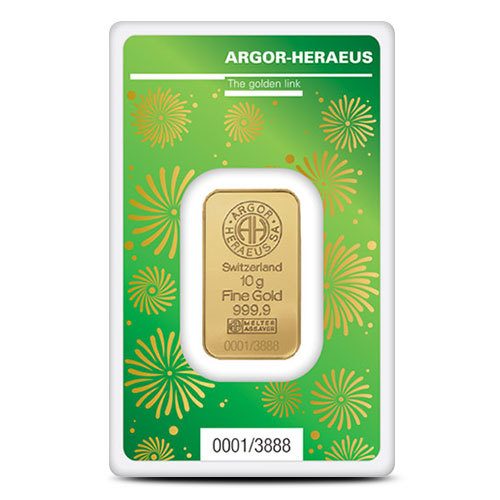 The Year of the Tiger is an important one within the Zodiac. Though the tiger is neither first nor last in the 12-year cycle of the Zodiac, the beast does represent one of the most revered animals in Chinese culture. The tiger is associated with good luck and is known to be the king of the beasts. Today, you have the opportunity to get 10 Gram Gold Lunar Tiger Bars online from Provident Metals.

The release of Argor-Heraeus Lunar Series Bars comes with four weights. The new designs available for each year on the Chinese Lunar Calendar are produced on 1 Gram, 5 Gram, 10 Gram, and 1 oz Gold Bars. Each bar size has the same mintage limit of 3,888 bars, focusing in the good luck associated with the number eight, and has an assay with matching serial number included.

On the obverse of 10 Gram Gold Lunar Tiger Bars is a depiction of a massive tiger. This large, powerful cat is shown as it prowls the jungle for its next meal. Tigers are easily identifiable by their orange fur with black stripes and white fur on the underbelly. When compared to other members of the species, tigers tend to have a longer body, with shorter legs. Like other members of its genus, the tiger has a large skull, massive paws, and a muscular frame. The lone inscription on this side is that of the Chinese symbol for the tiger.

The reverse side of 10 Gram Gold Lunar Tiger Bars features the identifying hallmarks for this release. The bar includes the Argor-Heraeus logo. The logo consists of two concentric circles, with a stylized AH in the central circle and the inscription of ARGOR HERAEUS SA in the outer circle. Below this, there are inscriptions of SWITZERLAND, 10 G, FINE GOLD, and 999.9. The assayers mark is beneath this, with the serial number beneath. The serial number is inscribed with a specific number on the left of a hash with the mintage 3888 to the right of the hash.

Tigers were first described in a scientific manner in 1758. Historically, the creatures roamed from the Anatolia Region of eastern Turkey to Siberia, northern China, the Korean Peninsula, the Indian subcontinent, and the islands of Java and Bali. Today, the tigers occupy just 7% of their historic range compared to the start of the 20th century.

10 Gram Gold Lunar Tiger Bars are available in individual blisterpacks. Each bar comes with an assay that has authentication details on both sides, including the weight, metal content, purity, and serial number.

Please contact Provident Metals with questions. You can call us at 800-313-3315, chat with us live online, or email us directly.